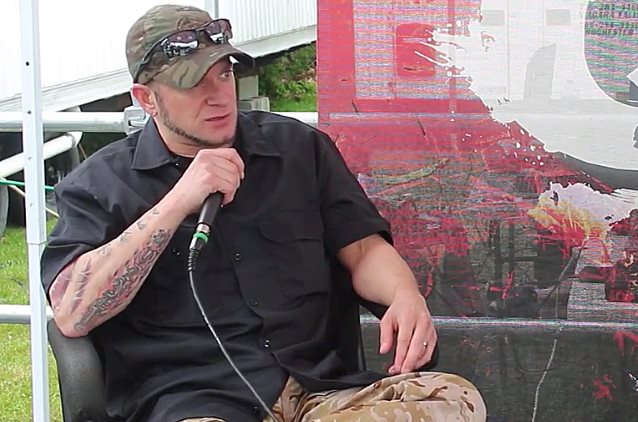 Tigman of the Q103 radio station conducted an interview with vocalist Phil Labonte of Massachusetts metallers ALL THAT REMAINS at the inaugural Rock'N Derby festival, which is being held May 20-22 at the Schaghticoke Fairgrounds in Schaghticoke, New York. You can now watch the chat below.

Speaking about ALL THAT REMAINS's planned follow-up to 2015's "The Order Of Things" album, Phil said: "We're working on out eighth record right now. We haven't started recording yet. We're working on the writing process. We start recording in June, and then June and July we'll be in the studio."

He continued: "['The Order Of Things'] came out just about over a year ago; it was in February of last year. So we try and get 'em out every two years or so, so we're looking at probably February or so for the next one."

Labonte also talked about what it's like to be considered one of the forerunners of the New Wave Of American Heavy Metal movement, alongside such acts as LAMB OF GOD and SHADOWS FALL. He said: "It's cool. I mean, the thing is the New Wave Of American Heavy Metal started so long ago… You're talking about something that now it's… arguably it started fifteen years ago or so, or at least that's when a lot of the bands like KILLSWITCH ENGAGE, SHADOWS FALL, ALL THAT REMAINS, LAMB OF GOD, GOD FORBID, BLEEDING THROUGH, AS I LAY DYING… all these bands were kind of starting at the same time. So there's been a lot of changes for some of the bands. Some of the bands aren't around anymore. Some of the bands have kind of moved on to do different stuff."

He continued: "Anytime you come up with a trend, which is what it was, you either have to branch out and break the mold of the trend, or else you stand a good chance of going down when the trend kind of goes down, which is why a lot of those bands, they're not around anymore. There's only a few of us left; there's LAMB OF GOD, KILLSWITCH, us, and most of the other bands… UNEARTH still plays, but most of the other bands that kind of came up at the same time are either broken up or they'll do a couple of shows a year, one or two weeks a year or whatever, but it's not their full-time gig. So being able to break the mold and branch out from starting in a scene and starting with a trend, and being able to make a career out of it is probably the coolest thing about coming up with the New Wave Of American Heavy Metal."

ALL THAT REMAINS last year parted ways with bassist Jeanne Sagan and replaced her with Aaron Patrick (BURY YOUR DEAD, DEVILDRIVER).