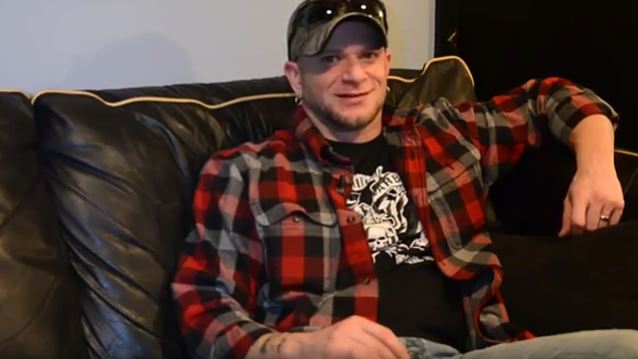 For 15 years, Massachusetts-based metallers ALL THAT REMAINS have written and released… whatever the hell they felt like with total disregard for what was considered trendy. Fronted by self-confessed contrarian Phil Labonte, the band has experimented with a range of styles, including pop, rock and caustic metalcore with just one objective — to create great songs that come straight from the heart.

"Our goal has always been to write songs that we like," Labonte says. "ALL THAT REMAINS has seen a lot of criticism about the songs that we've written and what people think we're supposed to do. We started as a very underground death metal kind of band, we've since moved away from that and have never apologized for it. The music we've written has been reflective of that and I think the lyrics, the ideas, have always been reflective of that as well."

And through it all, ALL THAT REMAINS has experienced considerable success. The band's last album 2015's "The Order Of Things", reached No. 3 on the Billboard U.S. Hard Rock Albums chart and No. 5 on their Top Rock Albums chart. And to date, ALL THAT REMAINS has sold over a million albums worldwide. The band has headlined across the world and played major festivals, including Rockstar Energy Drink Mayhem.

Yet along the way, ALL THAT REMAINS have taken flak from just about everybody: extreme metal purists who accused the group of selling out, rock fans that don't get the screamy stuff, liberals who object to Labonte's right-of-center lyrics and conservatives that can't understand the singer's non-violent, Libertarian ways. Labonte's response — bring it on!

"Madness", ALL THAT REMAINS's eighth album, is the band's most musically eclectic, provocative release to date — full of undeniable hooks, incisive riffs, electronic samples and a variety of vocal styles. And, of course, the range of subject matter addressed pushes the band's limits further than ever.

"I don't mind if I piss off if it gets them to think about things," Labonte says. "People know that I have strong opinions and I disagree with things. That's my whole deal."

As contrary as he wants to be, Labonte still values quality over confrontation. "Madness", produced by Grammy Award-winning Howard Benson (HALESTORM, PAPA ROACH, Chris Cornell), is ALL THAT REMAINS at their best, offering a level of accessibility and diversity lacking from much of today's hard rock and metal. The first single and title track, "Madness", is a microcosm for the rest of the album. The song starts on an experimental note with a barrage of amp static and the buzzing of ungrounded electricity accompanied by a sharp, simple drum intro. A pause later, the whole band kicks into gear, blending a propulsive rhythm with a kinetic groove that swings like a rope ladder in a thunderstorm. As the vocals enter, the guitars drop out, replaced by a delicate keyboard melody and electronic beats. Then, after Labonte sings, "Why should we escape ourselves? We are who we are in the end," the tone shifts back in a heavier direction, leading to a monster chorus more infectious than influenza." In true Labonte style, the tune is neither a love song nor a euphoric anthem about rocking out. "It's about socialism," Labonte says. "It's about the repetition of bad ideas."

Other songs on "Madness" are far more variegated. The leadoff track, "Safe House", which is about a man who lures robbers into his home and then kills them, is the heaviest track ALL THAT REMAINS has written since they played melodic death metal in the first half of the aughts. Driven by barreling beats, thrashy guitars, a crushing breakdown and metalcore screaming, the track pulverizes even as haunting keyboards and clanging percussion offer a brief respite from the jackhammer pounding.

Then there's "Far From Home", which shifts between ringing acoustic guitars and forlorn vocals about being lost and alone, and a euphoric rock passage that shows that there's always light in the darkness.

Throughout "Madness", ALL THAT REMAINS revisits the dichotomy between savagery and sensitivity. "Trust And Believe" contrasts double-bass drums, chugging riffs and melodic guitar licks with soaring guitar melodies and an anthemic chant-along chorus and "Halo" opens with a speedy electronic passage that sounds like a violin on hyper drive, then develops into a blazing number that balances melodic vocals with pain stricken howls.

"We really wanted this record to be different," Labonte says," explaining the inclusion of electronic samples and the dramatic juxtaposition between roaring chaos and accessible craftsmanship. "We wanted to really push ourselves and push the boundaries of what we're allowed to do. We've always pushed that envelope, but we wanted to push it more."

ALL THAT REMAINS started working on "Madness" in the spring of 2016, then in April Labonte flew from his home in Western Massachusetts to Los Angeles to start working on vocal melodies and lyrics with Benson. It was the first time the band didn't have fleshed out riffs and fully written rhythms to serve as guideposts for the vocals. At first, the process was difficult and the band members were uncomfortable, but the more they worked on the record the more excited they became about the way the songs were coming out. For the first time in years, they felt genuinely challenged and inspired to learn new ways to create.

"Me, Mike and Oli are the primary writers and we've always written songs on guitars because we're all guitar players," Labonte says. "It was a totally different way to write songs. And I feel like it was really, really cool to do that because it gave us a fresh perspective. I'd bring Mike and Oli the vocals and they'd use what I had come up with to construct the riffs instead of the other way around."

The most difficult song for Labonte to create was "Rivercity". The song begins with a ringing telephone and progresses through an electronic beat, a melancholy, ballad-like guitar line and plaintive vocals. The track changes in intensity numerous times and injects various rhythm shifts before ending like it began. When he was working on "Rivercity", Labonte's then-wife was deployed in the Middle East in the Marines and the singer was left helpless at home while she risked her life on the front lines.

While the title "Rivercity" sounds like an innocent enough name for a song — the kind of title John Mellencamp might use about childhood memories — for Labonte the term was very real and frightening. "Rivercity stands for 'reduced communications,'" he explains. "Me and my ex would be on the phone and she'd be like, "Yo, the base is getting mortared. I gotta go.' If someone dies, they shut off communications until they can notify the families of the people that die. So we'd be talking and she would say, 'Hey, we're going to rivercity and hang up, and I wouldn't talk to her for three or four days and I wouldn't know what happened. The base is getting mortared. She might have taken a round or died. Being on the other end of that is agonizing."

Integrating excruciating personal experiences, political rants and controversial commentary with music that's just as confrontational, "Madness" is an unapologetic showcase of honesty and ingenuity. Inducing gentle head-bobbing one moment and inciting teeth-clenching fist pounding the next, ALL THAT REMAINS have created about 50 minutes of attitude-laden rock music. Pick a song: "Open Grave", their version of Garth Brooks's "The Thunder Rolls", "Back At You", "Louder". There's something there to surprise, antagonize or incentivize.

"If you ask someone, 'Is this what you expected?' It's always a 'no,'" Labonte says. "And that makes me happy. Is anyone challenging what the listener expects anymore? We don't do stuff because we're supposed to."

Labonte accepts he'll continue to be misunderstood. Some will love "Madness", some won't, but the album will make an impression on everyone who gives it an honest listen. Asked how he'd like to viewed, Labonte responds, "I want to be the guy that really challenges people's ideas. I'm fucking punk rock. Punk rock hasn't been punk rock for 30 years. For too long metal has been bullshit, milky pandering crap. What happened to metal? What happened to punk rock? What happened to being anti-establishment? I wanna bring that all back."