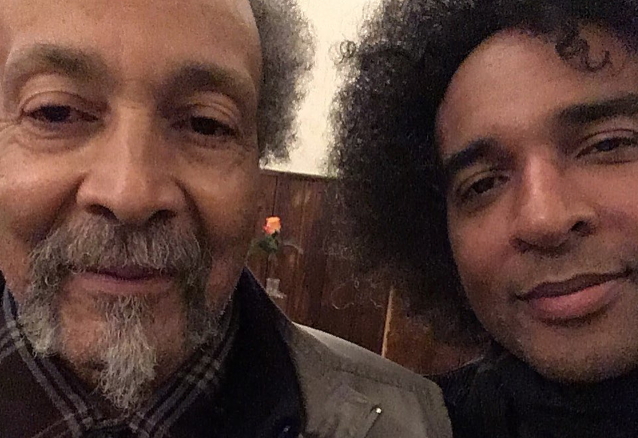 ALICE IN CHAINS frontman William DuVall has mourned the passing of Milford Graves, a pioneering jazz drummer most commonly associated with the free jazz movement. Graves died of congestive heart failure on February 12 at the age of 79.

DuVall, who spent more than a decade working on a yet-to-be-released documentary about Graves, took to his Instagram late Friday to share a 2016 photo of him and Milford, and he wrote in an accompanying message: "It was confirmed a few hours ago that Milford Graves has died.

"A master musician, scientist, naturalist, educator, and inventor of his own martial art, Milford was one of the great geniuses humanity has ever produced. He was a self-made warrior/philosopher of the highest order.

"For anyone who saw him perform or spoke to him for more than a few seconds, the force and depth of his energy and knowledge was undeniable.

"I've been working on a film about Milford for over ten years. There have been numerous location shoots in New York, Boston, Los Angeles, Italy, Chile, Brazil. I've interviewed rock stars who've been influenced by him, jazz legends who were his colleagues and contemporaries, cutting edge scientists who've worked with and admired him, students who had their lives changed by his teachings. And, of course, there are hours and hours of one-on-one interviews between Milford and myself.

"It's been a journey, to say the least. The central struggle of that journey has been distilling Milford's greatness into a digestible film that comes anywhere close to doing him justice. I haven't been able to get it right yet. I'm not sure it's possible. And now, no matter what I do, I've run out of time for Milford to ever see it. That saddens me beyond words.

"I'm well aware that tomorrow is guaranteed to none of us. But if there was anyone that I could picture living to be a 500-year-old Zen master, it was Milford Graves. Whenever he and I were discussing someone who had died, Milford would always refer to them as having 'left the planet.' Today, though it's difficult for me to accept, it was Milford's time to leave. But he'll never be completely gone. He's made such a profound impact on so many people. He'll certainly live on in everything I do. I loved and truly admired the man.

"What a crazy ride the last ten years have been. What incredible events and discoveries we documented. What a privilege to have him call me 'brother.'

"Tonight, my heart is with his wife, Lois (the love of his life since 7th grade), their children, and their grand-daughter who is the apple of Milford's eye."

An early trailer for DuVall's documentary, tentatively titled "Ancient To Future - The Wisdom Of Milford Graves", can be seen below.

Graves had been battling amyloid cardiomyopathy — also known as stiff heart syndrome — since 2018, when he was diagnosed and given six months to live.