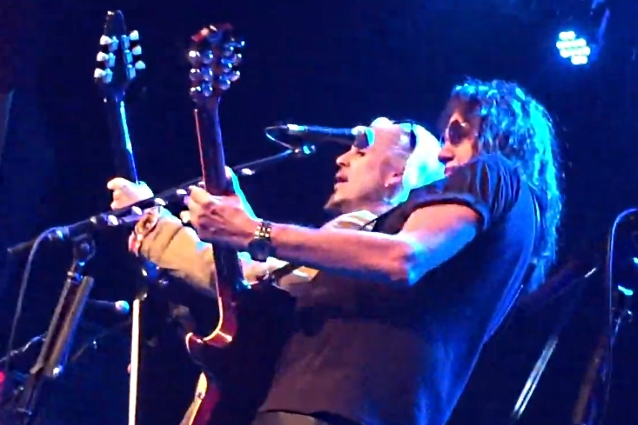 Former MARILYN MANSON and current ROB ZOMBIE guitarist John 5 joined Ace Frehley on stage this past Saturday (January 26) at The Canyon in Agoura Hills, California to perform the KISS classic "Cold Gin". Fan-filmed video footage can be seen below.

After the show, John 5 wrote in an Instagram post: "[Nikki Sixx] and I went to go see Ace and his awesome band tonight what a blast, and yes that is me playing a Flying V."

Two years ago, John 5 — real name: John William Lowery — took partial credit for reuniting Frehley and Gene Simmons at the former KISS guitarist's February 2017 concert in Beverly Hills, California, marking the first time the KISS legends were photographed together since their 2014 induction into the Rock And Roll Hall Of Fame.

John 5 told Seattle Music Insider that he "wanted to be like KISS" when he first started to play guitar. "[I] loved KISS growing up," he said. "Who didn't?" John 5 revealed in a separate interview with Digital Trends that KISS's 1977 classic "Love Gun" was the first album he connected with. "It's got a great cover. I loved it. I was, like, 'Oh my God — these are monsters with guitars!' I was so young then."

Frehley first left KISS in 1982. He rejoined in 1996 and parted ways with the band once again in 2002, soon after the conclusion of the group's first "farewell tour."

@nikkisixxpixx and I went to go see Ace and his awesome band tonight what a blast, and yes that is me playing a Flying V