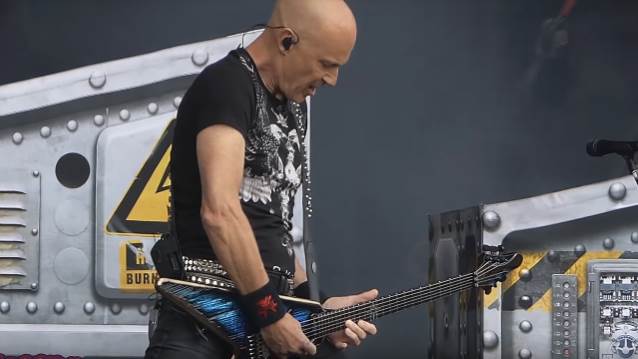 Wolf: "Every album sort of changes as time passes by; after you've had some time to reflect on it and after you've got many responses from the fans, you always have a different perspective. When you leave the studio, you're too close to everything; you can't see the forest for the trees, as they say. So with a little bit of time behind us now, it's much easier to get a sense of which songs are the favorite ones of the audience and which songs really stand out. And overall, I have to say this is just another really strong album with a very great reception from the fans."

On bands always saying how their latest releases are "the best they have ever done":

Wolf: "Usually, when you come out of the studio, it's supposed to be that way — I think you're supposed to have that feeling, [that] this is amazing, this is the best you can do at that time. But, of course, you cannot do the best all the time. So as time goes by, you realize, 'Well, this song was really stronger than that song.' It's always very hard, as a musician, to judge which one of your 10 children is really the favorite one of the audience. Because when I write the songs, I always wanna do the very best I possibly can, and it's very hard to say which one of those is gonna stand the test of time. And that's why sometimes in hindsight, albums are stronger than others. If you look back at my career of 15 albums, there are certain albums that stand out over others; it's just the way it is. But overall, I think ACCEPT is in a period right now where we have four very strong albums back to back. All that last period with Mark Tornillo on vocals is on a very similar level, quality-wise; I don't think there's any album that stands out over the others. And they're supposed to be, and that was our intention at least, we wanted to write very much a continuation from album to album without any major changes; we just wanted to really get better with each album."

On ACCEPT being viewed by some people as a "new band" since its reformation with Mark Tornillo on vocals:

Wolf: "Well, it is kind of a new era and a new band in a way, because when we regrouped and found Mark as a new singer, we really had that feeling of starting all over again and it kind of was that way. Of course, we have a long history and we didn't really start all the way from scratch, because we have fans and we have a legacy and a history, but as far as the band, as far as the guys getting together and starting this project again, it was sort of like a new beginning in a way. It was almost like opening a new chapter, and that's where maybe all the energy comes from. We felt like we have to prove to the world that we can still do it. It wasn't like something, 'Oh, we're just gonna play the old songs and it's gonna be great and people won't care.' No, we really wanted to say to ourselves, 'We wanna write albums that are relevant. If we do this, we wanna do it properly. We don't wanna just play the old songs. We really wanna create songs and albums that are equal or maybe even better than anything we've ever done in the past.' And that was our goal."

Wolf: "It's been somewhat of a miracle that we pulled it off as good as we have. Because changing singers is one of the hardest things to do in the music business — period — and it very often goes bad. But I think if the fit is right and if it's just meant to be, it's meant to be and it works, and it can work, and it did in our case. So we are very mindful of that, and we are totally aware that it's a rare thing. But at the same time, I think when we met Mark for the first time, we had that inner feeling, that inner voice that told us, 'Man, this has to work. It's just too good to be true,' because it really felt perfect. And that is a very rare thing. Usually, when you meet new musicians and you start jamming with them, you know within two minutes if it's a good fit or not. Sometimes you spend hours and hours, but you know after the first couple of minutes, 'Nah, this isn't really working well.' But with Mark, it was just the opposite; he came into the room one day almost 10 years ago and started singing, and we both felt like, 'Woah! This feels perfect.' And I think the audience feels the same way."

Wolf: "I don't think most bands release albums — especially if they've been in their career for a long time, they find that they will release albums slower as the years go by, because it's just the natural way of working. So we've actually had a lot of albums and a lot of output in the last 10 years — we've released four studio albums, a live album, I've made a solo album. So that's, like, five or six releases in 10 years. That's an incredible amount of work or an incredible amount of output. And I think we cannot keep this pace up forever, so the next album will probably have to wait another year or two. This year we are working on a live DVD from the last show in Wacken last year where we played with a 50-piece orchestra, so that's another release that's gonna come out. As far as studio albums, I think if you release one every two or three years, that's a lot of output, and I don't think that anybody can expect more than that."

ACCEPT will release a live set, "Symphonic Terror - Live At Wacken 2017", on November 23 via Nuclear Blast. Fans can expect a unique ACCEPT show, shot on August 3, 2017 at the legendary Wacken Open Air festival, where the band played the biggest and most extraordinary show of its career in front of 80,000, on top of thousands more fans watching via a live stream.