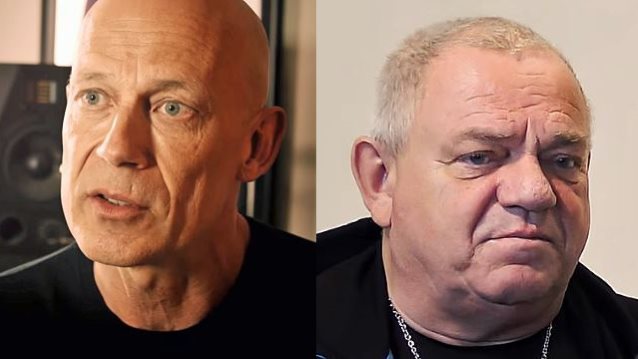 During a brand new interview with Fireworks magazine, ACCEPT guitarist Wolf Hoffmann declined to discuss "Live - Back To The Roots", a new release showcasing a performance of twenty-five ACCEPT tracks sung by the long-departed original voice of the band, Udo Dirkschneider. "We do not talk about other artists," he said. "The only thing we care is about our performance, our releases and our fans. There is always someone who is releasing whatever, whenever…. you can't avoid this. As I've mentioned so many times, we are where we want to be musically and performance-wise, and that is all we could hope for and all we can achieve. We are enjoying the best phase ever in the band and seem to be doing better with every album that we release, which has been our goal from 2010 onwards."

Udo recently told rock journalist Mitch Lafon that his decision to perform ACCEPT material one last time came about as a result of his desire to "close [the] book, and say, 'Okay, that's it. I read it.'" He explained: "Sometimes you have to come to an end with something. I wanna close up everything with ACCEPT. And this will be the last time."

Dirkschneider added that he didn't want to continue being compared to the current lineup of ACCEPT, which includes American vocalist Mark Tornillo. He said: "Now ACCEPT is still on tour, and they have a new singer, and they are doing also 'Balls To The Wall' and they are doing also 'Metal Heart', they do 'Princess Of The Dawn'. And I don't wanna be always compared and have to say, 'What do you think about this and this and this?' This is also another reason. I wanna close the ACCEPT chapter."

Udo insists that he has no interest in reuniting with his former bandmates, even if it's just to play one last show with the group. "If Peter [Baltes, bass] and Wolf called me [to play with them again], but I don't think [they would], but [if they did], I would say, 'Have fun. Bye bye,'" he told Greece's Rockpages.

Several months ago, Udo told Spark TV that he has "no relationship at all" with the members of ACCEPT. "We don't talk to each other," he said. "It's, in a way, also sad, but what can you do?"