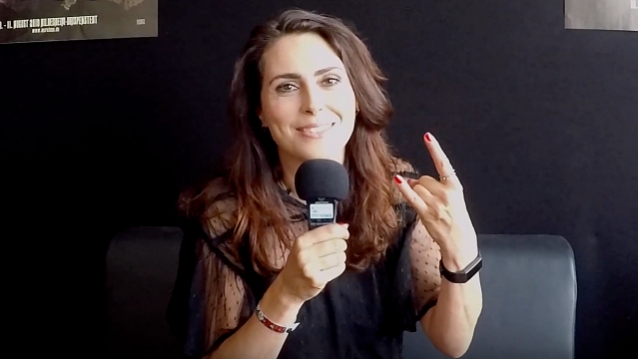 Sonic Seducer conducted an interview with frontwoman Sharon Den Adel of Dutch heavy rockers WITHIN TEMPTATION prior to the band's appearance at this year's M'era Luna festival in Hildesheim, Germany. You can watch the entire chat below. A few excerpts follow (transcribed by BLABBERMOUTH.NET).

On what has been the biggest challenge for WITHIN TEMPTATION for the last five years:

Sharon: "It's always been my challenge, mostly, for me personally, I always want to, like the rest of the band, write the best new song ever. [Laughs] For myself. Not for anybody else. Just to feel that excitement again of writing and creating songs. Of course, if you've already written so much, then it gets more difficult every time to be original. It's always trying to keep yourself inspired, but I love that also. It's not something that I have to force myself to be, but it's more something that comes naturally. Of course, you have certain ingredients that you always use or are attracted to. Sometimes you have to break free a little bit of that to create something new. That's maybe the hardest process to realize what your immediate attractions are. If your attractions are always, for instance, melancholy, try to get away from that. Maybe use melancholy in a different way again, but recognize what the things you like so much, but use them every time in a different way."

On whether the band's musical roots are still present in 2019:

Sharon: "My roots, I have so many different roots. I am a grunge girl originally. That's how I got into more heavy music. My parents were always playing a lot of kind of music from BLACK SABBATH to DEEP PURPLE, but also lighter stuff Chris Rea or QUEEN. I grew up with a lot of things around me that I found very beautiful. For myself, I chose to be a grunge girl when I was a teenager. Then I met Robert [Westerholt, guitar] and I didn't know about, for instance, PARADISE LOST. I never heard of them before. Then he introduced me to that kind of bands. Also DEAD CAN DANCE. Those are the ground roots of what I became later on. It's all based on those kinds of bands that I found very inspiring. Of course, from the band, it was more IRON MAIDEN and MARILLION, especially for Robert. He was a huge MARILLION fan. It's a melting pot of a lot of great bands. Then just, of course, you develop yourself from that. Then you make new music, but also always with the roots that you have."

On whether she's in regular touch with the other female hard rock and metal singers within the scene:

Sharon: "I know all of them and I'm in contact with every one of them, actually. I don't think there are many that I don't have contact with. I think we've come to realize that we're stronger together than separate — meaning that it's good to support each other on social media and to give a positive vibe to our fans and to everybody around us because that's more important than always trying to be different."

WITHIN TEMPTATION's latest album, "Resist", came out this past February. It marked the band's first release since 2014's "Hydra".