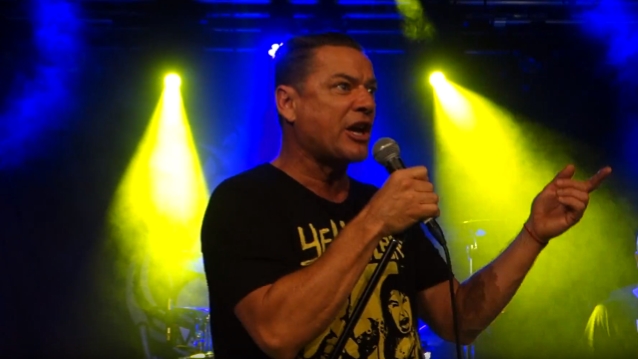 UGLY KID JOE frontman Whitfield Crane claims that he was once asked to join JUDAS PRIEST.

The seemingly unlikely pairing came close to becoming a reality in the mid-1990s while PRIEST was searching for a replacement for longtime singer Rob Halford. Rob left the band in 1992, citing his desire to pursue outside projects. PRIEST recruited vocalist Tim "Ripper" Owens in 1996 and released two studio albums, 1997's "Jugulator" and 2001's "Demolition", before reuniting with Rob in 2003.

Asked in a new interview with Metal Rules, if he has ever been approached by any "really big bands" about joining them, Crane said: "JUDAS PRIEST. It was when [JUDAS PRIEST guitarist] Glenn Tipton was doing his 'Baptizm Of Fire' [1997 solo] record, and I got Shannon Larkin, [UGLY KID JOE's] then-drummer, to play on it. He played two songs and replaced some badass drummers on that because it was click-tracked. And Glenn pulled Shannon and me aside and said, 'You boys can have the PRIEST gig if you want it.' And Shannon and I were pretty much into PRIEST. I mean, we loved PRIEST. And we went, 'Ah!' And all I said was this, 'Say it again.' And Glenn's a pretty fucking brilliant — I mean, he goes, 'What do you fucking mean, 'Say it again'?' And I'm all, 'Just say it one time?' And he's, like, 'You can have the fucking PRIEST gig, mate.' And, well, I was thinking, we can't do it, because you can't be Rob Halford. You can't be David Lee Roth. It'd be cool, and considering my love for PRIEST, which is immense, that would have been cool to do it, but not really. It's not a good move. But to jam with Tipton and to know those guys — I mean, those are my fucking heroes. JUDAS PRIEST, I mean, fuck. But man, old-school PRIEST, Jesus, God. So, yeah, I got offered PRIEST, back in the day. I never said that to anyone."

After the release of JUDAS PRIEST's 1990 album "Painkiller", Halford wanted to do a solo record, but the rest of the group wouldn't let him. So he left the band and did it anyway, while his bandmates continued without him.

In a 2015 interview with TheUnTicket.com, Halford stated about his exit from PRIEST: "I think I was on a bit of a journey, quite honestly. Musically, I've always been very curious and intrigued about other aspects of my own particular world in metal. And I enjoyed it. And I think what it did for me, maybe like it did for [basketball player] Lebron [James] when he went back to Cleveland from Miami. You go back to the home where you really feel you belong, you know, and that's how it turned out for me as a singer and as a musician. I had a good time, but I was yearning to go back to the band that I love more than anything else in the world. So it was a bit of a journey of self-discovery and trying to, kind of, put things in the right place, put things in the right perspective. Sometimes you have to leave the house for a little bit to realize how important it is to get back to your family. So that's how it turned out for me."