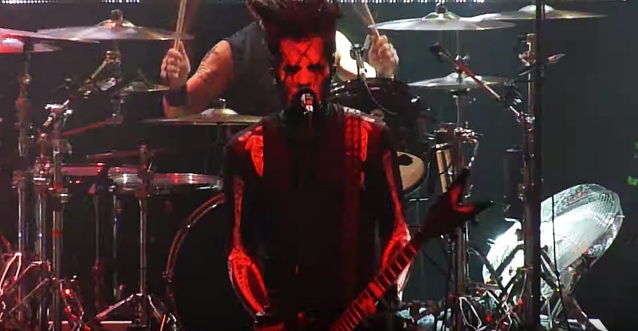 Fan-filmed video footage of STATIC-X's October 3 performance at O2 Ritz in Manchester, United Kingdom can be seen below.

As previously reported, STATIC-X will release a new album titled "Project Regeneration", featuring the last recordings of the band's late frontman Wayne Static, on May 29, 2020. The rest of the group's original lineup — bassist Tony Campos, drummer Ken Jay and guitarist Koichi Fukuda — will also be featured on the album and in the music videos, including the promotional clip for the single "Hollow", which was released yesterday. The teaser, which was directed by STATIC-X's touring vocalist Xer0 and co-directed by Matt Zane, also features a snippet of the band's hit song "Push It", re-recorded in 2019 with Xer0.

During the recording sessions for "Project Regeneration", one of STATIC-X's producers uncovered several additional unreleased and unfinished tracks, many of which contained isolated vocal performances by Wayne Static. Because of this incredible find, the new STATIC-X album will now feature lead vocals by Wayne on virtually every song.

Last year, STATIC-X released a teaser featuring clips from a brand-new music video, as well as five new STATIC-X tracks — "Road To Hell", "Something Of My Own", "Terminator Oscillator", "Hollow" and "Disco Otsego" — along with a personal message from Campos about the inspiration behind "Project Regeneration".

While the identity of STATIC-X's touring singer has not been officially revealed, strong rumors suggest that DOPE frontman Edsel Dope is the one performing with Jay, Fukuda and Campos and appearing in all of STATIC-X's promotional videos.