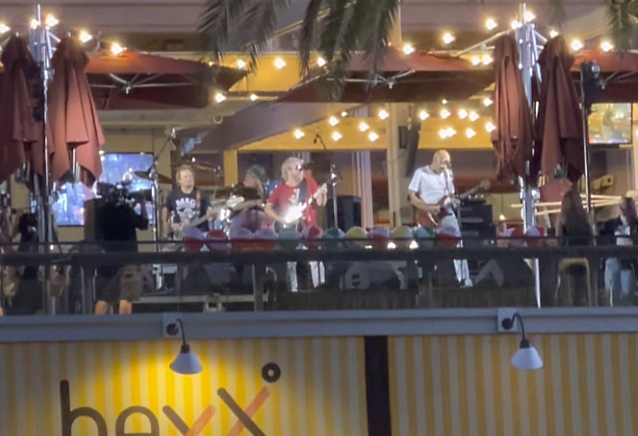 Sammy Hagar played a rooftop concert on Wednesday (September 22) above the Strip at Beer Park at Paris Las Vegas in Las Vegas, Nevada. The show started at 6:30 p.m. and ran about 30 minutes. 200 invited guests and contest winners were in attendance on the Beer Park deck. The show also played to the pedestrian traffic across the Strip.

Fan-filmed video footage of the show can be seen below.

When the event was first announced, Hagar said in a statement: "I'm so looking forward to doing this crazy thing, which I've never done before. It's inspired by THE BEATLES, who were one of the first ones to do it."

As previousy reported, Hagar will take part in a Las Vegas residency at The STRAT later this fall. "Sammy Hagar And Friends" will see Sammy performing with a rotating circle of other musicians.

"I've been searching the Las Vegas Strip trying to find the right room, ambience and partners to create a very special Cabo Wabo birthday bash type environment for my band members and musician friends to create the ultimate party residency," Hagar said in a press release.

The STRAT Theater has a capacity of about 800 people. The theater will be designed to capture the beach vibe Hagar's synonymous with, including elements of his famed Cabo Wabo Cantina in Cabo San Lucas, home to his epic annual birthday bash.

Fans will take in the experience of a lifetime seeing the legendary artist performing some of his greatest hits, which include some of the most iconic rock anthems ever written, like "I Can't Drive 55", "There's Only One Way To Rock", "Right Now", "Heavy Metal", "Mas Tequila", "Why Can't This Be Love" and many more in an intimate venue. "Sammy & Friends" will celebrate Hagar's career, spanning four decades, from his solo career, MONTROSE, VAN HALEN, CHICKENFOOT, THE CIRCLE, and surprise additions to the setlist depending on which of his musician friends take the stage with him. Produced by industry leader SPI Entertainment and Hagar's manager, Tom Consolo, of TC Management, the show will transport the audience to Baja, where you never know who will join Hagar on stage.

According to the Las Vegas Review-Journal, Hagar has invited such guest stars as Toby Keith, Rick Springfield, Kenny Chesney, Vince Neil (MÖTLEY CRÜE) and Jerry Cantrell (ALICE IN CHAINS) to the party. As for the setlist, Hagar said: "THE CIRCLE has the best setlist in the world, and the WABOS play a lot more of my old, deeper tracks, and my old vintage catalog from the rocker area, from the '70s, '80s — it's a mosh-up. We'll start with six, seven VAN HALEN songs, a couple of MONTROSE tracks, a LED ZEPPELIN song, six CIRCLE songs. We'll mix it up pretty good."

Posted by Brenda A Rusch on Wednesday, September 22, 2021