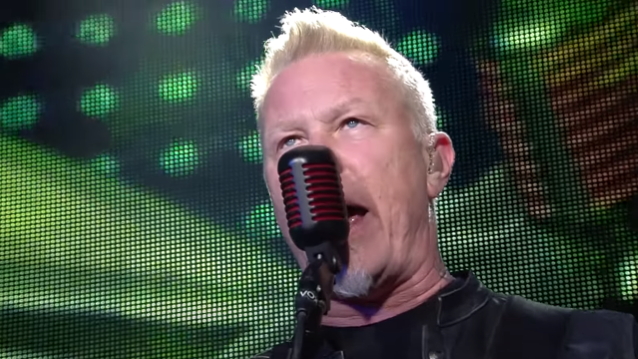 METALLICA has posted the final video as part of its concert series "#MetallicaMondays", where the band is streaming a complete live show for fans on the group's YouTube channel and on Facebook every week. The latest concert to be shared was recorded on March 3, 2017 at Foro Sol in Mexico City, Mexico.

In introducing the show, drummer Lars Ulrich said: "This is a big week in the METALLICA world. We’ve got 'S&M²' rolling your way on Friday. Then, on Saturday, if you're in North America, METALLICA will be appearing at your local drive-in theater! How cool is that?

"Since much of the world, thankfully, is in much better shape than it has been for quite some time — not everywhere, I know that — we figured that since there's such a big week happening in METALLICA, maybe we should sunset '#MetallicaMondays'.

"Unfortunately, this is the last one. Of course, there's a part of me that hopes '#MetallicaMondays' can return in some way, shape or form, but obviously, we don't want it to be because of COVID-19 returning again. So fingers crossed.

He continued: "Thank you for letting us help you a little bit through these crazy, surreal, challenging times. We're so grateful, appreciative and honored that these Mondays have gotten METALLICA friends and family all over the world together to share an experience and connect with each other in times of darkness and uncertainty."

METALLICA added in a statement: "When we started out with this little project, we thought we'd try something that would keep us busy and entertained in the face of the unknown. All of you made it something incredible. We watched you tune in week after week, and you blew us away, showing up to enjoy each show!"

METALLICA will be the first rock band to be featured in the Encore Drive-In Nights series, with a full set showing August 29 at hundreds of drive-in and outdoor theaters across the United States and Canada. The show was shot specially for the Encore Drive-In Nights Series at a location near the band's Northern California headquarters and was subsequently edited and mixed by METALLICA's award-winning production team to the highest standards possible. The concert, the band's first show in nearly a year, will feature material from throughout their near-four-decade career and provide METALLICA fans with an intimate, unique and truly memorable concert experience.

In early May, the four members of METALLICA overcame social distancing to record a new version of their song "Blackened", with each member separated in his own home. The split-screen video was posted to the band's social media channels.

Back in April, Ulrich revealed in an online chat that the band could get together to write and record a new album while in quarantine.