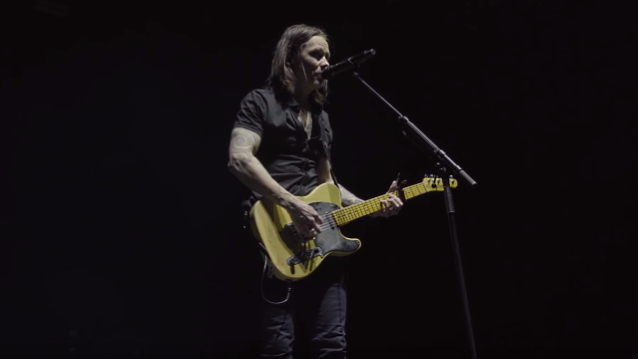 On December 9, ALTER BRIDGE performed at Paris, France's L'Olympia, a venue very near to the band's hearts due to it being the location where Jeff Buckley's historic 2001 live album was recorded. To mark the occasion, ALTER BRIDGE frontman Myles Kennedy got to play a cover of Leonard Cohen's "Hallelujah" — famously covered by Buckley — on Jeff's actual 1983 Telecaster guitar.

Before the performance, Kennedy dedicated the song to Buckley, calling the musician "probably one of my biggest influences" and saying that "we owe a great debt" to Jeff, who tragically died in May 1997 in an accidental drowning at the age of 30.

Earlier this year, Kennedy told Music Radar about Buckley: "Jeff was such an important musical figure in my evolution, especially in the early to mid-'90s. Don't get me wrong, I loved what was happening in Seattle. I'm from the Pacific Northwest and am very proud of all those bands and how much they affected music. But at that stage in my development, I was really trying to figure out how to integrate blues and R&B into what I was doing, to help inspire my own sound… I was just looking for guide posts.

"When Jeff Buckley came out, there was such a level of musicianship and emotive quality to his voice that really appealed to me. He had this angelic sound which I hadn't heard many male singers utilize. He used a lot of falsetto and soft-spoken ideas, almost more of a feminine side, which I thought was really interesting. He had this power in his upper register. It was ferocious when he went into those almost Robert Plant-style wails; then he would bring it down into something very soft that would draw you in. It was his sense of dynamics and that overall control over his voice that really appealed to me. 'Grace' is a truly brilliant album… I think we were robbed of a great talent there."

ALTER BRIDGE is continuing to tour in support of its latest LP, "Walk The Sky", which came out in October.