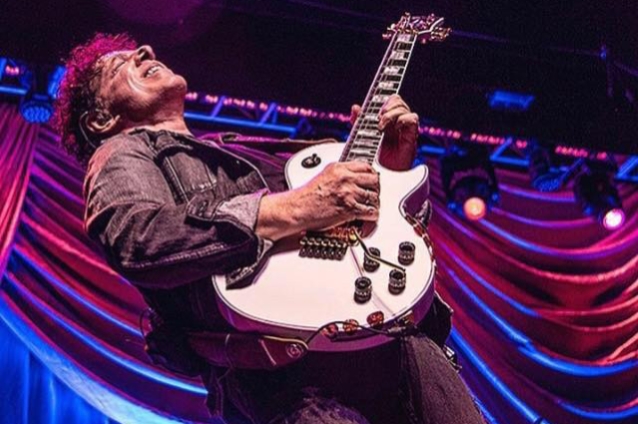 Professionally filmed video footage of JOURNEY guitarist Neal Schon performing the songs "Lights", "Still They Ride", "Lady Luck", "Any Way You Want It" and "People" during the debut "Journey Through Time" concert, which took place in February 2018 at The Independent in San Francisco, can be seen below.

"Neal Schon's Journey Through Time" performs all the greatest JOURNEY hits we've all come to love. They also perform choice selections from their earliest recordings.

Explaining his decision to play shows away from JOURNEY, Schon wrote on his blog: "I was told by management [John Baruck] that we all would take all of 2019 off, except for possibly a few dates near the end of the year leading into 2020 and that Jonathan Cain [and] Steve Smith [had] other things they wanted to do. At that point, I decided to go out and have some fun with Gregg Rolie, Deen Castronovo, Marco Mendoza, Marti Frederiksen and Chris Collins and dip into our catalog — deep tracks (from the beginning and beyond)."

Neal referred to Deen as "the baddest ass singing drummer on this planet," while Castronovo commented on his participation in "Journey Through Time", saying: "I will do the best I can with the songs you and I love, grew up with, and cherish. I'm no [Steve Perry] nor an [Arnel Pineda] but will try to honor the 'voices' and the legacy. I owe you all this."

JOURNEY will take over the Las Vegas Strip this fall with a limited engagement inside The Colosseum at Caesars Palace October 9-26.

The band previously played a nine-show mini-residency in 2017 at the Hard Rock Hotel featuring full performances of its "Escape" and "Frontiers" albums.

JOURNEY and DEF LEPPARD's 2018 North American co-headline tour grossed $97.1 million from 1,003,198 tickets sold, according to figures reported to Billboard Boxscore. The trek included 56 dates across the United States, plus two shows in Canada.