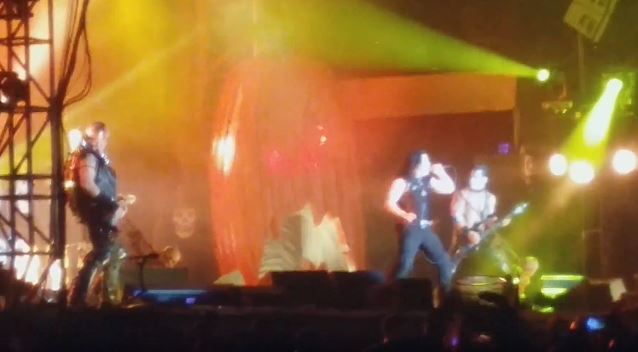 The reunion, billed as "The Original Misfits," took place at at Denver's Riot Fest And Rodeo. Joining Glenn, Jerry and Doyle at the show was drummer Dave Lombardo (SLAYER, SUICIDAL TENDENCIES).

Another MISFITS reunion show will happen at Riot Fest And Carnival on September 18 in Chicago.

According to Only, the reunion came about after a meeting he had with Danzig in January. The pair had gotten together with the MISFITS management in order to discuss the rights to the band's name and merchandising with a view towards avoiding any further litigation between the parties.

Regarding what fans can expect to see at the upcoming MISFITS concerts, Danzig said: "I'm just going to do what I normally do, which is to go out there and try and have a great time myself and make sure everybody has a fantastic fucking time. I want them to be so blown away they don't know what the fuck just hit them."

The original MISFITS band broke up in 1983, and bassist Jerry Only brought forth a new version of the MISFITS in 1995. Various members have come and gone, but Only, along with BLACK FLAG's Dez Cadena, has kept some form of the MISFITS in the recording studio and on the road for most of the last two decades.

After the original MISFITS disbanded, vocalist Glenn Danzig went on to form SAMHAIN and then the eponymous DANZIG. Several albums of reissued and previously unreleased material were issued after the group's dissolution, and their music became influential to punk rock, heavy metal, and alternative rock music of the late 1990s and early 2000s.