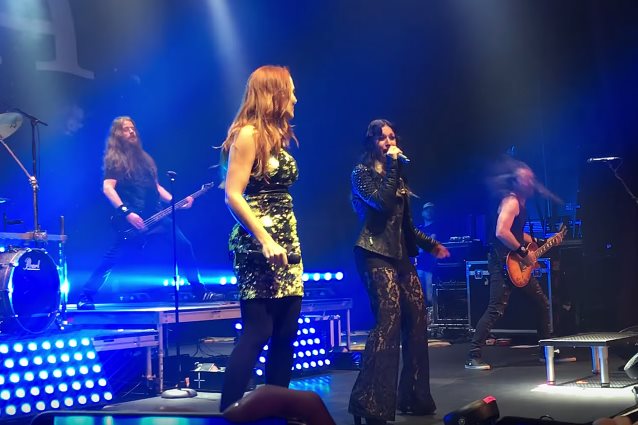 LACUNA COIL singer Cristina Scabbia joined EPICA on stage this past Friday, September 15 at The Novo in Los Angeles, California to perform the Dutch symphonic metal band's song "Storm The Sorrow". Fan-filmed video footage of her appearance can be seen below.

LACUNA COIL's month-long September tour with EPICA marks the Italian band's first U.S. tour dates in over a year, as they continue to support their latest album, 2016's "Delirium". Joining LACUNA COIL and EPICA on "The Ultimate Principle" tour are INSOMNIUM and ELANTRIS.

LACUNA COIL will celebrate the twentieth anniversary of its debut by playing a very special show, dubbed "Nothing Stands In Our Way", on January 19, 2018 at London, England's O2 Shepherd's Bush Empire.

It will be a unique extravaganza and truly exceptional event that is not to be missed. Apart from a career-spanning set, you will be able to enjoy LACUNA COIL songs never played live before. The show will be filmed and recorded for a release later in 2018.

LACUNA COIL's Andrea Ferro recently told the Impact metal channel that the band's fans will have to wait at least a couple of years for the follow-up to "Delirium". "Next year's gonna be twenty years of LACUNA COIL, so first we're preparing some surprises for next year, and then after that maybe we'll start working on a new record," he said. "So I don't think there will be a new record at least until 2019."

EPICA's new EP, "The Solace System", was released on September 1 via Nuclear Blast.

With their latest masterpiece, EPICA set new standards. 2016's "The Holographic Principle" is the most epochal, multi-layered, courageous and successful record of the band, reaching Top 10 chart position entries in the German, Dutch and Swiss album charts. Accordingly, all the tracks written for the album process are high quality, but not all songs have been put on the album. "This is only based on the fact that the record should not exceed seventy-six minutes," explained guitarist/vocalist Mark Jansen. Since the band didn't like the idea of a double CD, they finally decided to release an EP with six brand-new numbers, which were created during the creative phase of "The Holographic Principle".

"The Solace System" was recorded, mixed and mastered by Joost van den Broek and Jacob Hansen. 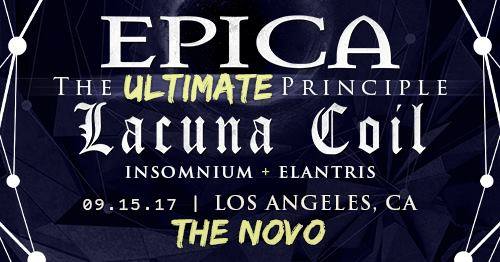