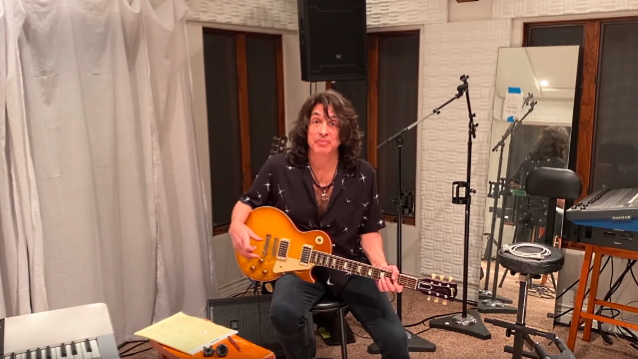 KISS frontman Paul Stanley has released a video of him playing the riffs from the band's classic songs "Makin' Love", "Hotter Than Hell" and "Got To Choose" from home quarantine.

At the beginning of the 14-minute clip, which can be seen below, Stanley addressed his online audience, saying: "How are you doing, everybody? I think it's Saturday, April 4th at dinner. And quite honestly, April 4th is just like April 2nd and probably the same as April 6th will be. All days are pretty much the same. Are we bored? Yeah. I'd like to be doing more than I'm doing, but it's great to be able to spend some time with you and just get together.

"It's funny because somebody, a couple of days ago, had gotten in touch with me and said, 'Why aren't you spending more time doing these videos and get 'em really, really great — get the performances great, get the singing great, the guitar playing great?' I said, 'Because the people I'm doing it for know that's not what it's about. This isn't a performance, it's not a concert, it's not a recital — it's me and you hanging out. And that means that — is it perfect? Hell no. But we get to have some fun. I get to have some fun.

"With that in mind, while we're doing this, we should all remember that there are doctors, hospital workers, sanitation people, police, people at supermarkets, delivery people — all these people are making this possible for us. And some of them are under horrific conditions and they're only trying to keep their heads above water and they're in a real dangerous situation. People in the hospitals working don't have what they neeed, yet they do it. So, my prayers for all of them, and let's not forget about those people.

"So, I was wondering, what will I do now? What can we do? And I thought, maybe I'll play just some riffs, play some little guitar parts, and you can sing if you want. You're in the band. If you know the parts of the song, sing along. It's just us — you, me and… I don't know. Two hundred thousand people, three hundred thousand people. Whatever it is. So we can have some fun. And I'll try to pull something out of the old memory bank. And let's see what we get."

U.S. officials have repeatedly urged Americans to heed what federal, state and local officials are asking of them in order to curtail the spread and dampen the impact of the coronavirus on the population.

The elderly — especially those with heart, lung and immunological conditions — are particularly vulnerable to the coronavirus.

According to the Centers For Disease Control And Protection (CDC), coronavirus is thought to spread mainly from person-to-person — between people who are in close contact with one another (within about six feet), and through respiratory droplets produced when an infected person coughs or sneezes. These droplets can land in the mouths or noses of people who are nearby or possibly be inhaled into the lungs.