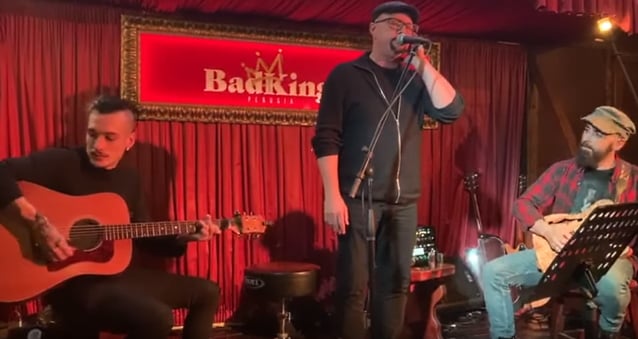 Video footage of original QUEENSRŸCHE singer Geoff Tate performing an acoustic version of the band's classic song "Eyes Of A Stranger" with Kieran Roberston, guitarist of his post-QUEENSRŸCHE group OPERATION: MINDCRIME, and a local guitarist in a small local pub in Perugia, Italy can be seen below. This event was part of the Back Stage Pass Travel Italy tour in December 2019.

Tate recently said that he started the Back Stage Pass Travel "touring company" to take people on the road with him and show them his "world."

"Not only do we take people on sightseeing tours in the area that we're visiting, but we also surround ourselves with music," he explained. "And there's musicians entertaining the guests almost continuously. It's quite a madhouse."

Geoff has spent the last couple of years celebrating the 30th anniversary of QUEENSRŸCHE's "Operation: Mindcrime" album by performing the LP in its entirety on European and U.S. tours.

Tate will perform the QUEENSRŸCHE albums "Rage For Order" and "Empire" in their entirety on the "Empire 30th Anniversary Tour" in 2020.