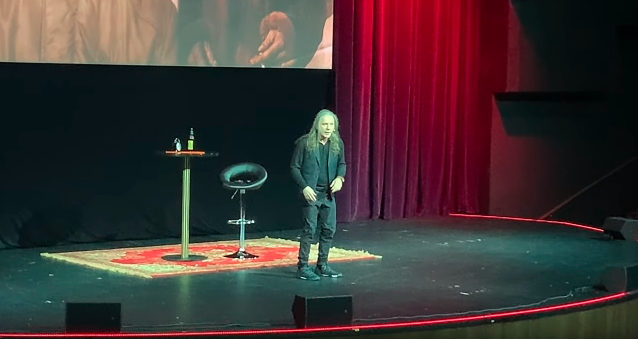 Fan-filmed video footage of Bruce Dickinson's one-man speaking show on March 12 at Vegas City Hall in Moscow, Russian can be seen below. The performance, dubbed "What Does This Button Do?" after the IRON MAIDEN singer's autobiography of the same name, featured a comedic routine as well as an unscripted question-and-answer session with fans.

Dickinson told the New Zealand TV show "The Project" about his speaking tour: "The show I do, basically, it's a one-man show. And it morphed out of being initially promo for the book. The publisher said, 'We're gonna rent a little theater and you just do some readings,' and I thought, 'Well, that's kind of dull, really.' So, years ago, when I was an undergraduate in college, my then-girlfriend persuaded me to go and see a one-man show by a guy called Quentin Crisp. So I had to be dragged along: 'Oh, who is this guy?' Anyway, it was absolutely brilliant. And one of the things he did in the second half was he took cue cards from the audience who wrote questions down, and he basically came and did almost like an improv thing where he answered the questions. So I thought that would be nice to do. So I sort of constructed this show, as it were, and just winged it. And it was so good, they asked me back to do the Edinburgh [International Book] Festival. And then the next thing after that was I've ended up doing a bunch of them in Scandinavia, and I'm now doing Israel and Greece and more shows in Scandinavia and everything else. So, all of a sudden, I've got myself this little extra gig."

"What Does This Button Do?", landed at No. 10 on the New York Times "Hardcover Nonfiction" best sellers list. It was released in the U.S. in October 2017 via Dey Street Books (formerly It Books), an imprint of HarperCollins Publishers.

"What Does This Button Do?" is Dickinson's third book. He has previously published two satirical novels, "The Adventures Of Lord Iffy Boatrace" about the English upper classes and "The Missionary Position" about televangelism.

Dickinson joined IRON MAIDEN in 1981, replacing Paul Di'Anno, and made his recording debut with the band on the 1982 album "The Number Of The Beast". He quit the band in 1993, pursuing several solo projects, and rejoined in 1999.

Dickinson, who turned 61 last August, has several other interests beyond music. He is a licensed commercial pilot and owns an aviation company. He has also done some acting and brewed beer. 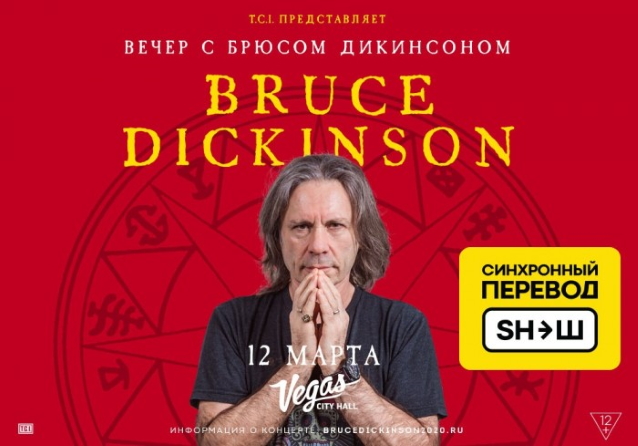