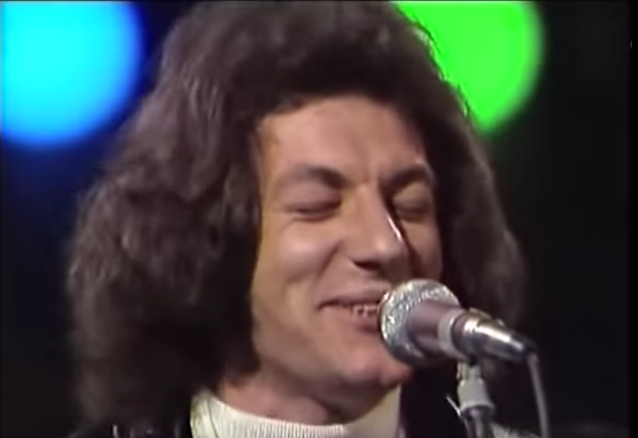 The Brian Johnson TV YouTube channel has uploaded two TV performances from Brian Johnson's pre-AC/DC band GEORDIE. The first is of GEORDIE playing its U.K. Top 10 hit "All Because Of You" in 1973 while promoting its debut album, "Hope You Like It", which came out in March of that year via EMI. The second is a live GEORDIE performance of "Goodbye Love" on "Pop '75", a music program that aired in West Germany from 1974 to 1979 and originally broadcast on the SWR and HR networks.

This past February, AC/DC guitarist Angus Young told 95.5 KLOS's "New & Approved" series about how late AC/DC singer Bon Scott first met Johnson in the early 1970s. "Bon had been in a band that had toured in Britain, and they were opening for the band Brian was in, which was a band called GEORDIE," Angus said. "Anyhow, they were gigging away, and as Bon told the story, he was saying he was listening to GEORDIE performing and listening to Brian, and then he heard this screaming. He said it sounded great — he said it sounded like Little Richard was on the stage. He said this guy [was] howling and yelling. And then he said then he saw the guy on the floor. Bon thought it was great — it was the best act he had seen, and a singer, in a long time. But what he didn't know, afterwards he found out, Brian had an attack of appendicitis. But Bon thought it was part of the act. He thought, 'This guy is incredible.' 'And he was still hittin' these high notes.'"

Brian previously spoke about crossing paths with Bon in a 2011 interview with New York Post. He said: "I met Bon in 1973 or 1974. His band was supporting my band, GEORDIE. I had a terrible case of appendicitis and I went down on my side, kicking and going, 'Ooh!' But I kept on singing. Apparently, he told the boys when he joined AC/DC, 'I saw this guy Brian Johnson sing, and he was great. He was on the floor, kicking and screaming — what an act!' Of course, it wasn't an act. I was really ill."

On July 25, 1980, AC/DC released "Back In Black" in the U.S., followed by the album's U.K. release on July 31. It was the band's first album without Scott, who had died a few months earlier after passing out and choking on his own vomit following a long night of drinking.

The group quickly decided to press on and hired Johnson from the band GEORDIE to take over on vocals, and they headed to the Bahamas for about six weeks to do the album. AC/DC had made some serious headway in America before Scott's death, but no one knew how "Back In Black" would be received.

"Back in Black" first went platinum in October 1980. The RIAA lists "Back In Black" as the fourth biggest-selling album of all time.

Despite its massive success, it never got higher than No. 4 on the album charts. The band's next album, "For Those About To Rock", reached No. 1.

"Back In Black" was produced by Robert "Mutt" Lange, who went on to produce DEF LEPPARD, FOREIGNER, THE CARS, and BRYAN ADAMS.

In 2012, "Back In Black" was added to The Recording Academy's legendary Grammy Hall Of Fame collection.

Last year, AC/DC launched a range of new merchandise to celebrate the 40th anniversary of "Back In Black".