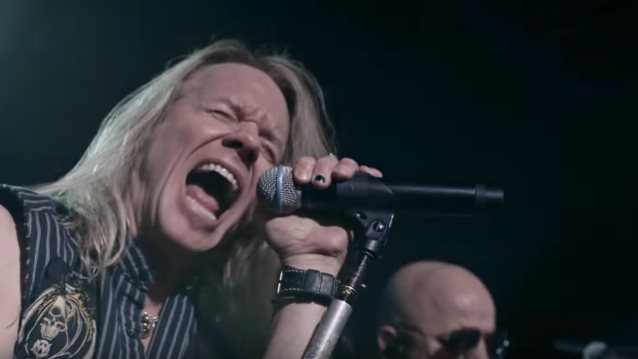 Veteran rockers WARRANT have released the official video for their remake of the classic Merle Haggard song "I Think I'll Just Stay Here And Drink". Check it out below.

WARRANT's cover of "I Think I'll Just Stay Here And Drink" was recently selected as the Professional Bull Riders' new "party anthem. The song will also appear on WARRANT's next album, "Louder Harder Faster", which will be released on May 12 via Frontiers Music Srl.

"During the 2016 PBR World Finals, we were fortunate to have WARRANT headline Saturday night in Toshiba Plaza, and they put on an incredible show for our fans, said Sean Gleason, the CEO of PBR in a statement. "When we found out the band are PBR fans, we jumped at the chance to work together on a custom music project and to make them a featured act during the 2017 season."

The official video for "I Think I'll Just Stay Here and Drink" was premiered in February at PBR St. Louis. The clip was filmed in Anaheim, prior to the PBR Built Ford Tough Series at the Honda Center earlier that month.

"Creating a party anthem is what WARRANT loves to do and getting a chance to create one for the 'toughest sport on dirt' is a bonus," said WARRANT guitarist Erik Turner. "We're pumped up to rock PBR Bars and events all year long."

"Louder Harder Faster" was recorded with producer Jeff Pilson, a veteran bassist who has played with DIO, FOREIGNER, DOKKEN and T&N, among others, and is currently being mixed by Chris "The Wizard" Collier (FLOTSAM AND JETSAM, PRONG, LAST IN LINE).