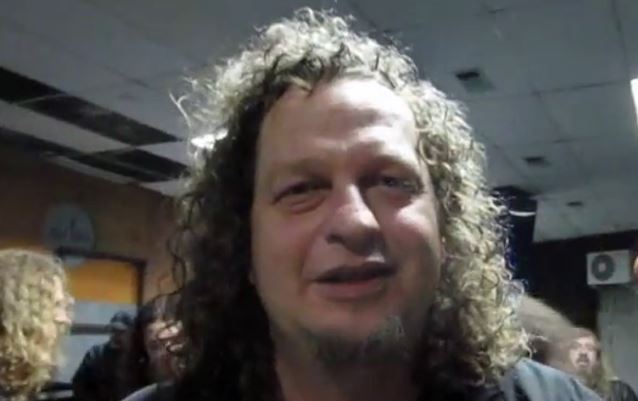 TJ Buggins of the "Do You Know Jack?" radio show on CJIM Montreal conducted an interview with vocalist Denis "Snake" Belanger of Canadian metal pioneers VOIVOD on August 9 at the Heavy Montreal festival in Montreal, Quebec, Canada. You can now listen to the chat using the Mixcloud widget below.

VOIVOD has tapped Dominic "Rocky" Laroche to play bass for the band following the departure of Jean-Yves Thériault (a.k.a. Blacky). Laroche, who has previously performed with blues musician Steve Hill, made his live debut with VOIVOD on July 12 at Festival Jonquière En Musique in the group's former hometown of Jonquière, Quebec, Canada.

Prior to VOIVOD's performance at Festival Jonquière En Musique, Thériault (who did not attend the event), along with fellow founding VOIVOD members Denis Bélanger (a.k.a. Snake; vocals), Michel Langevin (a.k.a. Away; drums) and the band's late guitarist Denis D'Amour (a.k.a. Piggy), were honored as international ambassadors of La Ville de Saguenay (of which Jonquière is a suburb) and will have their names inscribed on a plaque describing the history of the group, to be installed permanently at the Nikitoutagan Square in Jonquière.

Langevin reassured fans that VOIVOD will continue despite the departure of Thériault.

"Dominic Laroche will play with us at the Heavy Montreal festival with METALLICA on August 9, and then we will write a new album, which will probably be released next year," he said. "In the meantime, we will continue playing shows."

VOIVOD on July 11 released a statement claiming that Blacky "decided to leave the band for his own personal reasons."