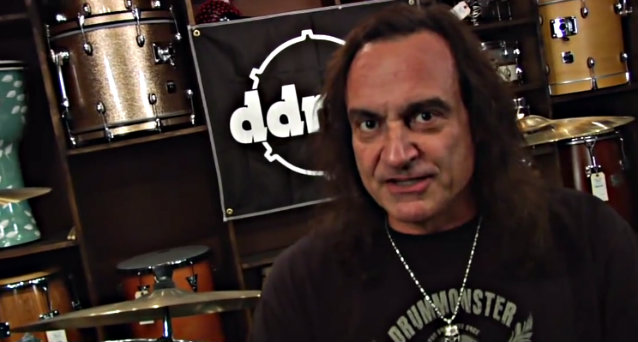 The latest episode of the "Mars Attacks" podcast (hear audio below) features an interview with legendary drummer Vinny Appice (BLACK SABBATH, HEAVEN & HELL, DIO, LAST IN LINE). During the chat, he discusses his recent exit from KILL DEVIL HILL; recording new music with LAST IN LINE (which features remaining members of the original DIO lineup plus Andrew Freeman on lead vocals); how he feels the DIO legacy is being handled after the passing of Ronnie James Dio; what it was like working on the upcoming tribute album to Ronnie, "This Is Your Life"; being part of Rock 'N' Roll Fantasy Camp; and jamming with BLACK LABEL SOCIETY mainman and former OZZY OSBOURNE guitarist Zakk Wylde and ex-OZZY OSBOURNE and QUIET RIOT bassist Rudy Sarzo.

Asked about Wylde's recent comments regarding the Ronnie James Dio-era BLACK SABBATH in which Zakk stated that the Dio-fronted version of the band sounded too different from the group's previous output to be rightfully called BLACK SABBATH, Vinny said: "Everybody's got an opinion, and that's his opinion.

"The thing with a Dio-fronted SABBATH and an Ozzy-fronted SABBATH is, he's right: it's two different bands, it's two different sounds. There is a tie between them — you can hear the sound of Tony [Iommi] and Geezer's [Butler] style and their personality in there, but the stuff done with Ronnie, and this is with the 'Heaven And Hell' album — I'm not even on that — sounds different than the old SABBATH stuff. There's still a tie in there, but it became a different band, a little bit more musical; they could play more challenging stuff than what they did before. And then the stuff with me was the same thing; the band was able to go a little bit more into unknown territory with the music, because Ronnie and I are players. Ronnie is a real musician-singer, and Ozzy's a singer-frontman. And Ozzy's great, Dio's great. It is two different things; it just happened to have the same name. The stuff with Ozzy could never sound like that without Ozzy. And all those songs, the way they were written and the vibe and the attitude, man, that's some cool stuff. And that was just classic.

"It's very unusual for a band to be able to have two different lineups and yet be equally as strong musically, but different. Same with VAN HALEN; with David Lee Roth, it was a different band. And then they got Sammy [Hagar], they became more musical, more mature, maybe, more… You know, 'We can try different things. We've got a different kind of singer.' It's a different band with the same name.

"Some people I meet never heard of the early SABBATH; they started listening to 'Mob Rules', or they stated listening to 'Heaven And Hell', and they only know SABBATH from Dio singing. So it's amazing, all the different opinions you get."