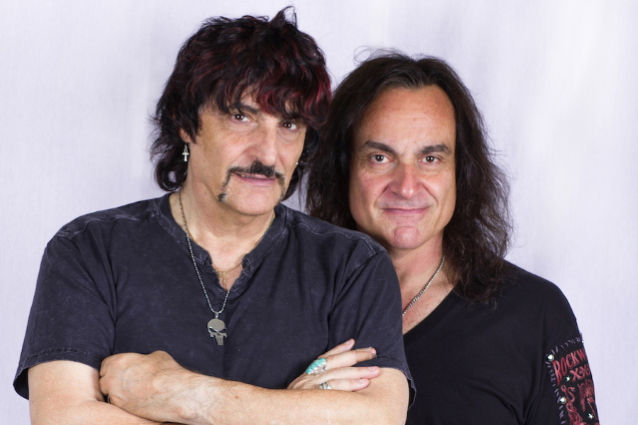 Legendary drummers and brothers Carmine and Vinny Appice will release a new video on Saturday, May 16 to commemorate the tenth anniversary of the passing of the late, great Ronnie James Dio.

Vinny, who worked with Ronnie while playing drums for DIO, BLACK SABBATH and HEAVEN & HELL, spoke about the clip in a brand new interview with the "Music Mania" podcast. He said (see video below): "In 2017, Carmine and I released an album together that we worked on. And it's really good; it's called 'Sinister'. Good album, and it's the first album we've done together — full album. So, on that album was a song called 'Monsters And Heroes' that Carmine had, and they were gonna use it for KING KOBRA. But since they didn't use it, Carmine played it for me, and I said, 'It's a great song. Let's do it ourselves.' The lyrics are written Paul Shortino [ROUGH CUTT, QUIET RIOT], and they're all about Ronnie — it's like a tribute to Ronnie. So I went ahead, and we edited the drum parts, and then this way I could put my drum parts in, and there's parts where I play alone, [Carmine] plays alone, and then we're together. It's called 'Monsters And Heroes', and it's a great song. And we played it live. And then the other day, we were talking, Carmine and I, about doing a video — maybe releasing one of these virus videos, as you see. And he said, 'Yeah, let's do it.' I said, 'Well, let's do 'Monsters And Heroes'; it's kind of the single of the album.' And then the next day, I realized, 'Oh, wait a minute. Ronnie's anniversary is coming up. How cool is that, when we're going to do the song about Ronnie?' So, a lightbulb went off: let's just promote it and have a nice tribute for Ronnie on the 16th, which is his 10-year anniversary. So the video is pretty much finished. It looks great. And we're playing live — not all at once, but live in each individual location. It came out great. We're really excited about it. It'll be a nice tribute."

During the "Music Mania" chat, Vinny also remembered the time he spent hanging out with Ronnie, both as a bandmate and as a friend. He said: "Ronnie was very down to earth, very nice to people. When he met people, when he met fans, and you told him your name, you could see him a year or two later and he'll remember your name. Unlike me [laughs], who forgets right away. Not on purpose — it's the way it is. Ronnie remembers everybody's name. And he always made a point of taking care of his fans. On the first 'Holy Diver' tour we did, we were playing in England — in London, actually, at the Hammersmith. And after the show, we were hanging out upstairs. We never left the shows very early; we usually partied a little bit in the dressing room and stuff. And then, after we all dried off, we were partying a little bit, they said, 'Ronnie, there's, like, 50 kids downstairs waiting for autographs. They're outside,' and it's cold — it's January. So Ronnie said, 'Bring 'em inside the theater.' So they brought all these kids in the front-row seats, all the fans, and we all went down and signed everything and took pictures for them. Ronnie loved doing that stuff. This was before the days of paying for a V.I.P. So, it was really cool. So he always took care of his fans."

He continued: "We had a lot of things in common. We both liked to fix things around the house — plumbing, electrical, whatever. A number of times, Ronnie and I went to Home Depot and bought stuff. And I'd help him. I'm really into that stuff, I'm into fixing everything — cars, everything. I'd go over his house, and we'd fix whatever. And it was cool. Musically, he had great ideas — always had ideas. And [he was] very easy to work with."

Dio was renowned throughout the world as one of the greatest and most influential vocalists in heavy metal history. The singer, who was recording and touring with BLACK SABBATH offshoot HEAVEN & HELL before his illness, was diagnosed with stomach cancer in late 2009. He underwent chemotherapy and made what is now his final public appearance in April 2010 at the Revolver Golden Gods Awards in Los Angeles.