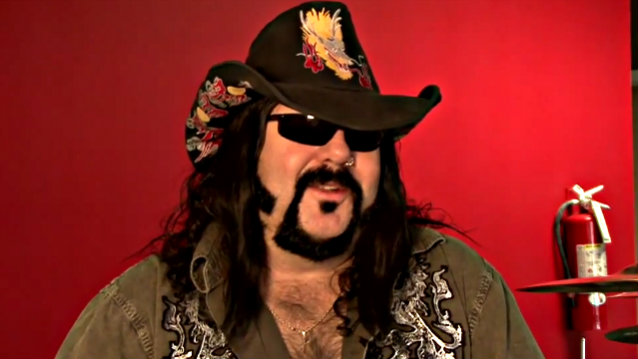 AltSounds recently conducted an interview with former PANTERA and current HELLYEAH drummer Vinnie Paul Abbott. A couple of excerpts from the chat follow below.

AltSounds: Obviously, all that press you're doing is to promote the new HELLYEAH record, "Blood For Blood". How is it sounding compared to the previous records?

Vinnie Paul: It's the best record HELLYEAH have ever made. We recorded with Kevin Churko (OZZY OSBOURNE, FIVE FINGER DEATH PUNCH) and it's the first time we've worked with an outside producer ever in this band, and we did it in Las Vegas. It's actually been done since January, so it's been in the can for a minute, but I just love it, man. It's very intense and has some of the best songs we've ever written, it's the best-sounding record we've ever done and we just feel really confident, and I'm really excited that it'll be out and we'll be touring it soon.

AltSounds: Your previous album, "Band Of Brothers", was a much heavier album compared to the first two, which had more of a country and blues feel. Have you continued to rediscover your metal roots on the new album?

Vinnie Paul: Yeah, that was probably our most focused record. "Band Of Brothers" brought us back to our metal roots, and we really got back to what was probably expected from us when we started, and the new record is a continuation of that. But it also pretty varied. For us, it's like our "Back In Black". It just feels like our perfect record. Every song feels right and flows right and we're really proud of it.

AltSounds: You've had a pretty major line-up change recently with [bassist] Bob Zilla and [guitarist] Gregg Tribbett both leaving. How come they left and did their departure have an impact on the album?

Vinnie Paul: Well, before we started into this record, there were quite a few personal issues that they were never really able to put behind them, and it was starting to interfere with the band. If we were going to move forward, we needed to make a change, so we did, and the record was basically written and recorded by myself, Tom [Maxwell, guitar] and Chad [Gray, vocals] and we since got Kyle Sanders on bass. He is a monster bass player — he used to play in BLOODSIMPLE – and we're gonna get another guitarist, and we've got a couple of guys in mind, but we'll announce that at a later date.

AltSounds: Now you've all come from previous bands such as MUDVAYNE and PANTERA but obviously the band as a whole is a collective of each of its individual parts, with everyone influencing each other to create one unique sound. How has your drumming style changed since working with this particular group of musicians when compared with PANTERA?

Vinnie Paul: Well, the first couple of HELLYEAH records were a little more simplified. They were more rock records with a heavy metal influence, but with "Band Of Brothers" and in particular "Blood For Blood", I really wanted to get back to my style of drumming, which is 100% metal, which is what people expect from me, so I'm really excited for people to hear what I did on this record. I think I did some pretty cool and groundbreaking things, and obviously, the groove has been the most important thing in almost everything I've been a part of. So it's a continuation of what I do and I've really got back to my roots, so to speak.

Read the entire interview at AltSounds.