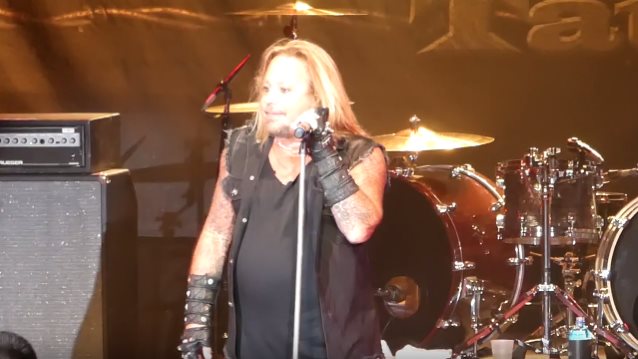 Fan-filmed video footage of the concert — which was part of Neil's solo tour "The Legacy Continues" — can be seen below.

MÖTLEY CRÜE called it quits in December 2015 following an eighteen-month tour that saw the group performing to packed houses all over the world.

A tour film about CRÜE's final shows, "The End", came out last fall, and a film adaptation of the band's 2001 autobiography "The Dirt" is still said to be in the works.

Speaking to "Trunk Nation", Eddie Trunk's show on SiriusXM channel Volume (106), Vince acknowledged that he is currently the only member of MÖTLEY CRÜE who is waving the flag for the band's music by performing CRÜE songs as a solo artist.

Neil reiterated the fact that he doesn't mind performing in much smaller places with his solo band than he was accustomed to playing with MÖTLEY CRÜE. "I always look at it like the best of both worlds," he explained. "You know, we had the big, giant MÖTLEY stuff and everything, and then you've got… I like going out and playing… We do fifteen-hundred, two-thousand, three-thousand seaters and some festival stuff, and it's fun to go out there and just let the music do the talking, as the song goes. And I don't miss it. I like just going out there and just raw."

Even though Neil's solo set consists exclusively of MÖTLEY CRÜE material, he says that he tries to keep things fresh by occasionally throwing in "deeper" album cuts that many fans wouldn't expect to hear in a live situation.

"Like [the] songs 'Red Hot' and 'Piece Of Your Action', we didn't have [them] in the set for a long time, and then I was, like, 'Yeah, let's just go ahead and let's do this,'" he said. "Then we added 'Red Hot' and we stopped doing it for a while, and then we just added it again."