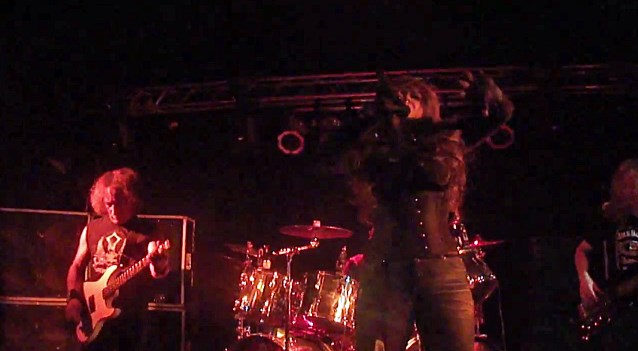 BENEDICTUM frontwoman Veronica Freeman joined THE RODS on stage Friday night (April 24) at Suzy's Tavern in Auburn, New York to perform three classics that were originally sung by Ronnie James Dio — "The Mob Rules" (BLACK SABBATH), "Heaven And Hell" (BLACK SABBATH) and "Stand Up And Shout" (DIO). Fan-filmed video footage of the performance can be seen below (courtesy of Randy "MetalWulf" Smith from The Metallic Onslaught).

David "Rock" Feinstein of THE RODS is the cousin of Ronnie James Dio (both played together in ELF) and THE RODS drummer Carl Canedy is an acclaimed metal producer who has worked on classic early releases by MEGADETH, ANTHRAX and OVERKILL.

THE RODS' seventh release overall (and sixth release overall for Niji Entertainment Group, a label that was created by Ronnie and Wendy Dio) was titled "Vengeance" and was made available in May 2011. The album arrived on the heels of Feinstein's solo album, "Bitten By The Beast".

The first single off "Vengeance" was "The Code", which featured vocals from none other than Ronnie James Dio (one of the very last songs that Ronnie ever recorded, before his untimely death in May of 2010). Ronnie also appeared on the headbanging anthem "Metal Will Never Die", which was included on Feinstein's solo effort, "Bitten By The Beast".

In a 2010 interview with Artisan News, Feinstein stated about "Metal Will Never Die": "About two years ago, Ronnie was coming back home [to upstate New York] more frequently because his mother had gotten ill, so he was making frequent trips back to Cortland. And one of the times he had called me and said, 'I'm gonna be up, I'm gonna be there for a few extra days. It'll be a good time. I can sing a couple of songs.' And I said, 'That'd be great.' And when I got my solo record done, Wendy [Dio's wife/manager] and both decided, 'Hey, let's put one song on your solo album and the other song could go on the new THE RODS record.' The horrific turn of events, with Ronnie passing away, the fact that I wrote that song, the fact that he chose that week to come up and sing it, it's just kind of an eerie thing, because it was kind of meant for him to write it, meant for him to sing it. And now this song is part of his legacy; it's a tribute to him, really, in a way. And now it becomes, like, the most important song I've ever written."