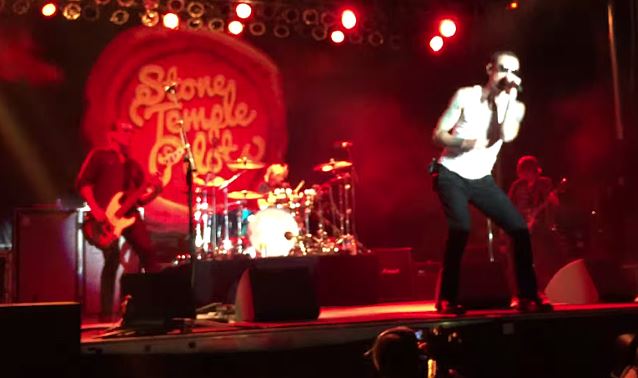 Fan-filmed video footage of STONE TEMPLE PILOTS' March 28 performance at the Arizona Bike Week in Scottsdale can be seen below.

STONE TEMPLE PILOTS vocalist Chester Bennington was asked in a new interview with ArtistDirect.com about the progress of the band's next full-length album, which is due out this fall. Bennington replied, "We're really trying to take the musicality to a different level and to bring a lot of energy. We got super funky. This thing is as raw and real as it gets… It's fun to be a part of that and do it on that level this way. It's really interesting. I'm having a great time doing it."

STP bassist Robert DeLeo told The Pulse Of Radio that the band has never stuck to one formula when it comes to creating new songs. "There's no rules to writing music and that's what I enjoy about it, you know," he said. "You've always got ideas stored away somewhere, you know. There's those ideas and there's also ones that hit you at the moment and you realize that this could be something that we could all dig into and bite into, and that's really exciting when it's one of those."

STONE TEMPLE PILOTS recently dropped the added "With Chester Bennington" from their name after settling their legal issues with former singer Scott Weiland.

The band began working with Bennington in May 2013 after firing Weiland three months earlier. So far it has released one EP called "High Rise" with Bennington on vocals.

STONE TEMPLE PILOTS will kick off a U.S. tour on April 8 in Seattle.