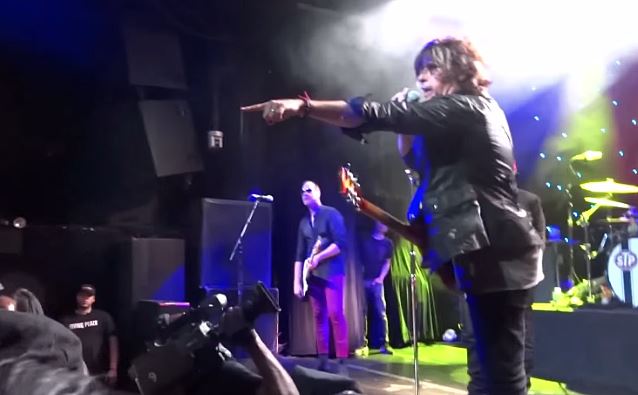 STONE TEMPLE PILOTS guitarist Dean DeLeo ejected a fan during the band's show in New York City after the concertgoer was allegedly being verbally abusive towards the group.

Asked by Yahoo! Music to compare current STONE TEMPE PILOTS vocalist Chester Bennington with former frontman Scott Weiland, DeLeo replied, "There's no comparison. It's like talking about the strength of a two-year-old baby compared to a professional body builder. I'll tell you this man, Robert [DeLeo, bass], Eric [Kretz, drums] and I are really fortunate. We're having the time of our lives right now. We really feel like this has been a rebirth."

STP dismissed Weiland in February 2013, claiming that his erratic behavior held back the band's career. The two parties exchanged lawsuits which have since been settled.

"[Robert, Eric and I] never had trouble," DeLeo said. "Our trouble was Scott. Scott's troubles were our troubles."

STP recruited Bennington that spring and have so far cut one EP, "High Rise", with the LINKIN PARK singer. A new album is due out later this year.

STONE TEMPLE PILOTS are just wrapping a tour now but have announced new fall dates, starting on September 15 in Cleveland.