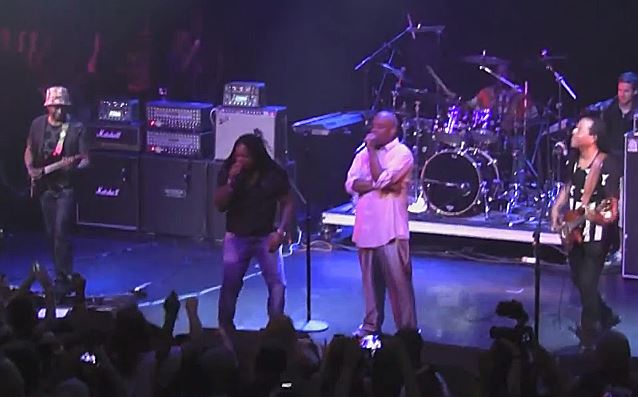 LIVING COLOUR invited Lajon Witherspoon of SEVENDUST on stage during this year's ShipRocked cruise to perform the "Vivid" classic "Cult Of Personality". Check out video footage below.

Each ShipRocked is a once-in-a-lifetime experience that provides guests with the opportunity to vacation with their favorite bands, meet new friends, and reunite with old friends year after year. On any given day, guests might find themselves dining, drinking, rocking out, swimming, working out, or gambling alongside their favorite rock stars. The full-ship charter provides a one-of-a-kind experience for guests to have the time of their lives with thousands of like-minded friends.

Guests spent two full days enjoying concerts and activities on a private beach on Great Stirrup Cay in the Bahamas. The island features a large performance area on the beach with full production for rock shows and offers various island excursions such as parasailing, snorkeling, canoeing and more.

In 2013, LIVING COLOUR celebrated the 25th anniversary of the release of "Vivid" by touring North America and Europe, where they performed the record in its entirety at each stop.

"Vivid" was released in May 1988. The album reached position No. 6 on The Billboard 200 chart and was certified double platinum by the RIAA (Recording Industry Association Of America) for sales in excess of two million copies. Five singles from the album were released: "Cult Of Personality", "Middle Man", "Glamour Boys", "Open Letter (To A Landlord)", and "Funny Vibe".