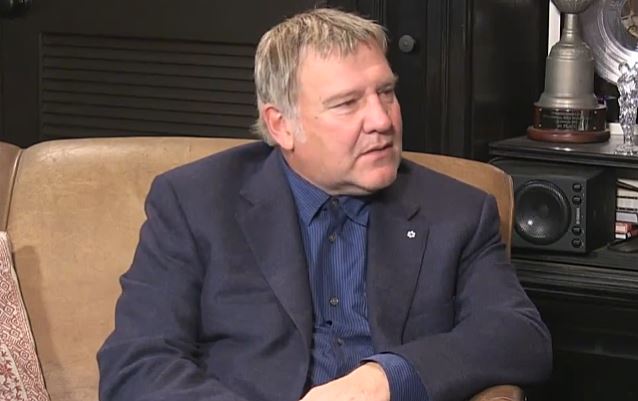 Legendary RUSH guitarist Alex Lifeson was a guest on the April 22 episode of the "Renman Live" web show from Renman Music & Business, the music industry mentoring web site founded by longtime industry veteran Steve Rennie (a.k.a. Renman). You can now watch video footage of the chat below.

"People ask me all the time how you learn the music biz," said Rennie. "Simple. Hang out with smart people.

"On my web show, 'Renman Live', I've been lucky to have had some of the smartest, most talented people in the music biz join me to share their stories, insights and advice with aspiring artists and music pros who are dreaming of doing something big on their own and need some inspiration and direction.

"If you are interested in the music biz, watching an episode of 'Renman Live' is the next best thing to sitting on the couch with me and my guests."

RUSH has announced a 34-city North American tour in celebration of the band's 40th anniversary. The "R40 Live Tour" kicks off on May 8 at Tulsa, Oklahoma's BOK Center and winds down on August 1 in Los Angeles, California at the Forum.

Out now is "R40", a RUSH video box set on six Blu-ray discs or 10 DVDs. The collection includes live footage from all four decades of the band's career, including over two hours of previously unreleased material, a rare performance of "2112" in its entirety, three previously unreleased tracks from 1974, and more.