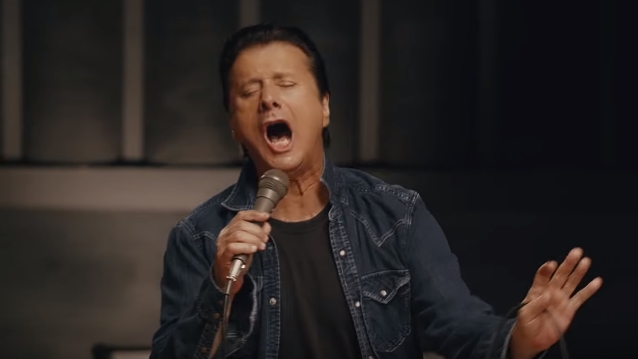 Former JOURNEY vocalist Steve Perry has released the official music video for his latest solo single, "No More Cryin'". The song is taken from "Traces", his first solo album in more than two decades, which will be released on October 5 via Fantasy Records (a division of Concord Records/UMG). Co-written by Perry and Dan Wilson (SEMISONIC, ADELE), the track is a soulful reflection on isolation and love.

Perry states: "'No More Cryin'' is a love song, but not in the way you would think. It starts in one place, and builds and lands somewhere entirely different. It's got many overtones, and can be applied to so many different kinds of relationships, including my own relationship with past isolation."

"Traces" marks Perry's first solo album since 1994's "For The Love Of Strange Medicine", which was certified gold in the U.S. for sales in excess of half a million copies.

Perry told "Scott Shannon In The Morning" about his decision to step away from music for more than two decades: "The band was really, really fortunate to be successful, and at some point, I got a little bit toasty, a little burned out, and coupled with a serious touring schedule, and, like I said, being crispy, and back in the day, we all had a little bit of what we might call 'extra party behaviors,' maybe — and when you put the 'party behaviors' together with a little bit burned out, I was toast.

"It was an unpopular decision I came up with at the time, which was just to stop," he continued. "And I told the band, and they were not happy about it. But the biggest thing I was really concerned with was the fans. Because I knew it was gonna be a painful decision for me to walk away, but sometimes you just have to take care of yourself, even if it hurts to do so — you have to do that."

Asked if he planned on being gone for so long, Perry replied: "I did not plan to be gone so long. But once I stopped, there was something great about just stopping. I went back to my hometown and hung out with friends. I rode my motorcycle on these country roads on the outskirts of Fresno, where I was born and raised, and I've gotta tell you — there was something cathartic about just stopping."

Perry reiterated a previous comment he made about wanting "to be a person again" after his exit from JOURNEY. "I think that's pretty accurate," he said. "I just wanted to step out of the limelight. Being successful in a band like that, it was like… I know it sounds a little bit self-serving, but it really was kind of like circling the earth — you're kind of up there, you've gotta come down, you've gotta land, you've gotta touch down, you've gotta go back to your hometown and just be you, not the guy that was on the stage every night.

"But I must tell you — did I miss it? It was terrible!" he admitted. "It was a detox in its own way, you know? Because the adoration of the fans every night and the applause and being able to live the dream…. 'Cause I came from a small town, and it was a dream to get in the music business to start with, but to be able to be successful like JOURNEY was, it was a dream come true, so walking was tough."

The singer was inducted, alongside his old band, at the 2017 Rock And Roll Hall Of Fame ceremony in Brooklyn, New York.