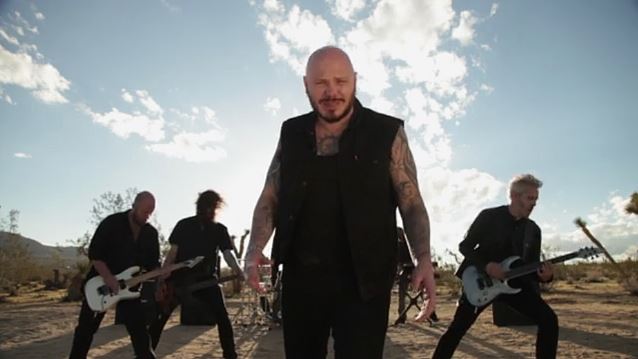 "Death In General", the new video from Swedish metallers SOILWORK, can be seen at Toontrack.com. The clip was directed by Hristo Shindov and shot on location in Joshua Tree, California.

"After finishing up our North American tour at the Whisky in Hollywood, we got up at 5 a.m. the next morning and drove into the desert.

"Joshua Tree is truly a magical place and was the perfect setting for this song and the mystical feeling it generates.

"BLIND MELON guitarist Christopher Thorn was very kind to let us use his land for the shoot and he also welcomed us into his home.

"Director Hristo Shindov and his assistants did a fantastic job, capturing the vibe of the song with stunning footage. The dancers, Daisy and Flannery, also did an absolute outstanding job, as they danced in the sunset. Truly magical.

"We are very proud to present this video for one of the most powerful songs that we have ever written. Hope you enjoy it and that you somewhat can imagine the feeling we had while recording it! We highly recommend sipping on a real good tequila or mezcal while watching it..."

Joining SOILWORK on tour in support of the effort is new bassist Markus Wibom, formerly of Helsingborg hardcore group HEARTS ALIVE. Wibom replaces longtime bandmember Ola Flink, who amicably left the group to focus on other endeavors. Wibom has been a personal friend of the band for many years and has previously toured with SOILWORK as a guitar tech and lighting designer. Wibom made his live debut with SOILWORK in Stockholm on April 30.

Asked how "The Ride Majestic" celebrates 20th anniversary of the band’s existence, Strid told Bloody Disgusting: "It is kinda hard to grasp. I think both 'The Living Infinite' and our new album sums up our career very well, both musically and lyrically. There's a certain existential feel running through those albums and especially 'The Ride Majestic', brings up the darker existential aspects. As pretentious as it may sound, I also feel that we've left certain things behind and have entered a new era, where we let us be driven by spontaneity and emotion."

Regarding whether there are any tracks that stand out to him as being deeply important on a personal level, Strid said: "I think they all gradually become more important with age. However, some of the early more primal teenage angst oriented lyrics are harder to relate to today. One of the best lyrics I've ever written comes from the new album, 'Death In General', that captures the feeling of the very last moments with somebody close, who's on their death bed. Father and son, watching the world go down is from a very realistic dream that I had about the last moments on earth with my dad and the realization of the end."