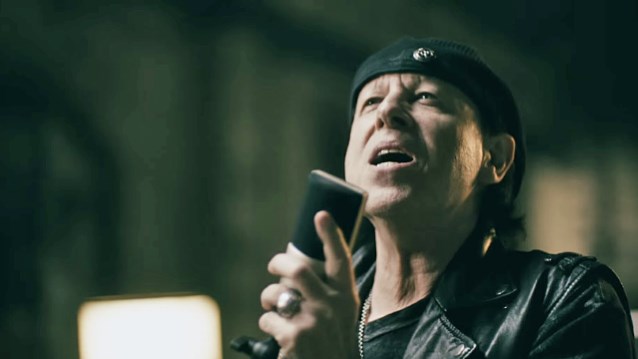 The brand-new SCORPIONS studio album "Return To Forever" was released on February 20 on CD, Deluxe CD, vinyl, Limited Collector's Box, and several more digital and physical formats. The video for the first single, "We Built This House", can be be seen below.

"Return To Forever" was recorded with Mikael Nord Andersson and Martin Hansen, who had already produced "Sting In The Tail", and re-arranged the material for "MTV Unplugged" with guitarist Matthias Jabs.

"There's something unreal about the number," reckons Klaus Meine. The video for "Wind Of Change" has been viewed more than 108 million times on YouTube to date. VEVO meticulously recorded the view requests and certified them. With this, the SCORPIONS are the first German band cracking the 100 million click mark. Once again, the SCORPIONS have written a piece of music history.

The number is not only impressive, it also highlights the SCORPIONS phenomenon. 50 years after a very young Rudolf Schenker founded the band in the profoundly provincial, post-war Hannover, the SCORPIONS remain a band that is able to attract masses of new fans at any given time. A fact that surprises even the musicians themselves, as they gladly admit. "It's really remarkable," says Rudolf Schenker, for example, "how well and mostly unharmed we've survived those years, in which our kind of music seemed to have gotten out of style completely. When the grunge wave hit the shore, we simply went to Asia to tap new markets and gain new fans. We were able to continue playing and keep on winning new friends for our music."

"Today", they all marvel, "we're not only as hip as we were at our best times, our audience is becoming younger and younger as well." The insight that new generations worldwide are just now discovering the SCORPIONS inspires them. In 2010, the band had reached a point where the perpetual cycle of studio sessions, album releases, and subsequent mega tours had in the end worn them out to such an extent that they seriously considered winding down and planned to retire with a farewell tour. 2013 however, a world tour later, brought a breath of fresh air. The sensational "MTV Unplugged" concert at the Lycabettus open-air theater in Athens was the most urgent reminder of how dreamlike and intense performances in front of an audience can be, and what challenges still await them. Either way, the hunger for more had returned, for all of them.

So the band once again met up with their two favorite Swedes to realize a project, which initially had been intended to be rather plain. Mikael Nord Andersson and Martin Hansen had already produced "Sting In The Tail", and re-arranged the whole material for "MTV Unplugged" together with Matthias Jabs.

"Actually, we only wanted to finally record some song ideas for the fans, which we had worked on in the past but never put on an album, and then release them without much fanfare," Matthias Jabs remembers. "There had been quite a few over the years, ideas that were really good, but in the end didn't make the cut back then due to the limited space on vinyl and later on CD. We quickly had eight songs, which partly had to be finalized first and were then recorded from scratch. During the work, increasingly new song ideas were added from our end, as well as from the two Swedes. We had so much fun working and suddenly we found ourselves in the middle of the songwriting process once again. And in the end, it turned out to be a brand-new SCORPIONS album after all."

The fact that the fiftieth band anniversary was coming up as well, hit Rudolf rather accidentally. "Not long ago I found an old cash account book of my mom's, in which she meticulously recorded the earnings and expenses of my band SCORPIONS fifty years ago," he said. "My parents had lent me the money for the first equipment back then, and it had to paid off in installments from the earnings. 50 years are a long time. Apart from us, at most THE ROLLING STONES, the BEACH BOYS or THE WHO managed to do that. In that sense, the timing for the new album is perfect, we're celebrating half a decade of SCORPIONS with the record and the upcoming tour."

Ultimately, the band recorded 19 songs altogether. Twelve of which are on the album, sixteen on the deluxe edition. They all present the SCORPIONS at the peak of their creativity once again. Tracks like the first single "We Built This House" are as contemporary as the sweeping "House Of Cards" (a guaranteed live hit). Also belonging in the category live hit is "Eye Of The Storm", a track, that transports a notion of the unbelievable dynamic and joy of playing, characterizing the SCORPIONS' stage performances. In songs like "We Built This House" the band reflects the past fifty years; their philosophy and the lessons, their unusual life taught them. Klaus Meine says: "In the end, it tells our story. We've built this house called SCORPIONS brick by brick and often quite arduously. From the first days in Hannover, the first concerts abroad, until this very day. We've weathered severe storms, but the house withstood everything, turned out to be wheatherproof and stable. However, building the house was never just cumbersome, but joyful as well. The joy of music, the joy of having experienced and still experiencing it all, the joy of — and the thankfulness for — the fans' affection. We have been working hard for this dream, but we're thankful as well for having been able to live it, and for still being able to live it today."

In these fifty years, the world has changed rapidly. When the SCORPIONS started, the present with its smart phones, the Internet, intelligent fridges, holograms, and online streaming services was hardy imaginable even for the boldest science fiction authors. The SCORPIONS have witnessed and participated in all of these changes, were up to speed with these developments as artists and musicians, while at the same time staying true to themselves at all times. That too, is documented on "Return To Forever". The band was never in need to make concessions to the respective zeitgeist, their own creative potential was much too extensive for that. For this, they have earned highest recognition worldwide, and in these fifty years have contributed an inestimable share in restoring the profoundly damaged reputation of Germany in the world after the Second World War. The fact that this contribution is now being acknowledged, is not least proven by the bestowal of the Lower Saxon State Award for the year 2014, which the band will receive on February 3, 2015.

Just how much the band is still charged with high voltage is demonstrated by classic arena rockers like "Going Out With A Bang" or the fantastic "Rock 'N' Roll Band". Songs like these already whet the appetite for the upcoming world tour kicking off middle of next year, which the band is already looking forward to. Not least, "because it's simply unbelievable and inspiring to look into the faces of very young fans, who discover us and our music in a whole new way." And who, this might be added, experience the magic that characterizes SCORPIONS concerts since their early days, for the first time. The tour will take the band around the globe once again. 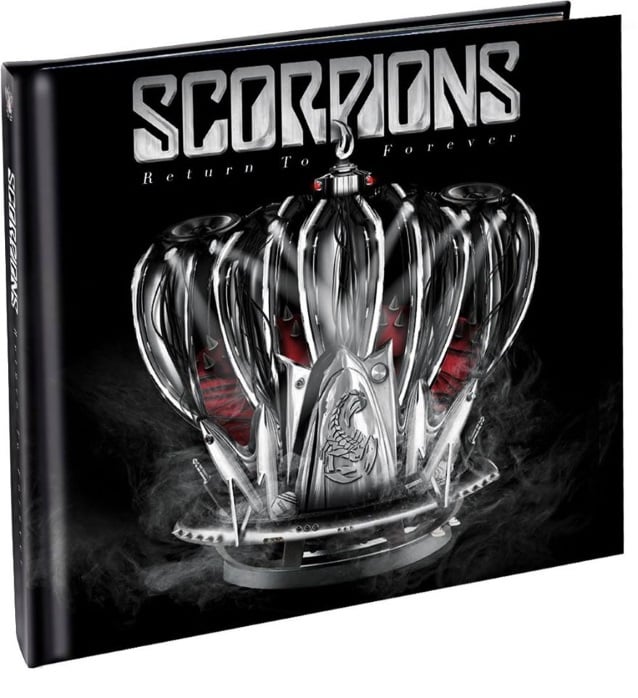