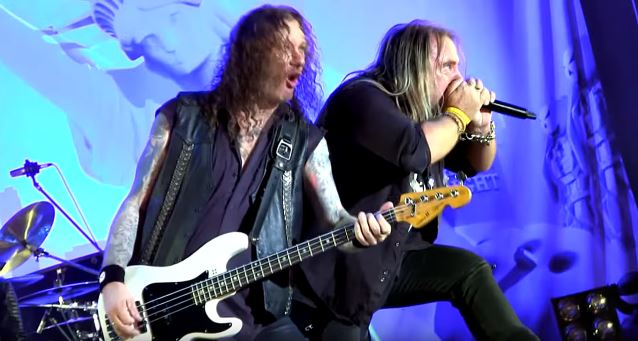 "Lost In America", the new video from German power metallers HELLOWEEN, can be seen below. The song is taken from the band's 15th studio album, "My God-Given Right", which was released on May 29 via Nuclear Blast. The CD was recorded between October 2014 and February 2015 at the band's MiSueno Studio on the isle of Tenerife with producer Charlie Bauerfeind (GOTTHARD, HAMMERFALL).

HELLOWEEN singer Andi Deris told The Rockpit about "Lost In America": [It] is a true story. Whenever I listen to the song, I go, 'Oh yeah, I remember. Bastards!' Because they closed the airport in Belize in South America and we were left stranded with thousands of passengers and all the flights were cancelled... you can't imagine! Imagine this happening in our western world in Australia or Frankfurt, Germany and people would probably start a revolution and tear down the whole fucking airport! I mean, just imagine if someone says, 'Okay, we're closing the airport now. Fuck off! If you have a ticket or not, we don't fucking care.' It was unbelievable. We were stranded there for 17 hours, and if that wasn't enough, when we were finally on the plane from Belize to Sao Paulo, after two and a half hours airborne and nobody thought there was anything strange, but suddenly the captain announced, 'Ladies and gentlemen, captain speaking. As you may have realized, the plane is flying very low, we should be higher.' And it was true, you could easily count the cows down there, so after two and a half hours, you should be somewhere like 10,000 metres, and the captain said, 'The gauges are not working correctly, something is very strange here and as soon as it's daylight, we definitely would like to fly back by view if possible.' And, yeah, [laughs] everybody was scared to death, and like, 'Wow, what's going on there.' So he turned the plane and by view, actually followed the river back to Belize. [It was] so unbelievable. You can imagine a rock and roll/metal band on the plane, again drunk. [laughs] We were already completely pissed at the airport because waiting 17 hours. You cannot tell a metal band to stop drinking. [laughs] Then again on the plane, the guy announcing, his original words were: 'The guages are not working correctly. We are somehow a little bit lost here in America. [laughs] So I thought, 'Okay, I have to write a song about it.'"

The "My God-Given Right" artwork was once again created by graphic guru Martin Häusler (BON JOVI, QUEEN, GOTTHARD) and is also available as a 3D lenticular print.

HELLOWEEN will return to North America to play select shows in February and March 2016.