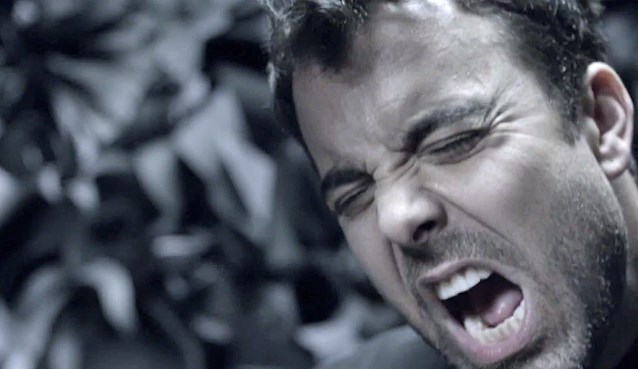 "Cold Blood", the new video from cello rockers APOCALYPTICA, can be seen below. The song is taken from the band's new album, "Shadowmaker", which will be released in April via Eleven Seven Music Group's Better Noise imprint. The Finnish musicians — accompanied by their American lead singer Franky Perez — recorded the CD with Grammy Award-winning producer Nick Raskulinecz (FOO FIGHTERS, DEFTONES, MASTODON).

In a recent interview with Australia's The Rockpit, APOCALYPTICA's Eicca Toppinen stated about "Shadowmaker": "It's always hard to talk about albums without being a nerdy musician. I think it's a totally new kind of record for APOCALYPTICA, especially because we have one singer on the whole album, and I think it's making the whole album more solid. It's more of a band record compared to the album that we have had guest vocalists, so I think it's more solid.

"We had a break when we stopped touring for '7th Symphony', we had one year off, we didn't write a single song for a record, nothing except for 'Wagner Reloaded', but for the regular stuff, nothing. And after the break, we came together and if we wanted to do something, we have to do exactly what we want to do and this record is the result of that, that journey.

"We wanted to challenge ourselves even more and we wanted to be tight as a band before the pre-production and the thing that Franky [Perez, vocalist] was part of the pre-production, we spent weeks with him in the rehearsal room arranging the songs and getting things more defined before we went into the studio.

"I think this album is full of attitude, it's a real attitude record."

Asked how APOCALYPTICA ended up hiring Franky Perez to handle the vocals on the entire "Shadowmaker" record, Eicca said: "It was actually the beginning of June last year when we made the decision to, 'Okay, there's no more guest vocalists on this record. We need to find a guy who makes the record and will tour with us for the record. It's like a puzzle where all the pieces of the puzzle are spread all over, they are not connected, and we need to get those pieces connected. And ways to have one singer to make the whole thing more understandable for people, to make the working circumstances more comfortable for us where things are not so dependant on people outside of the band — the guests, the managers and the label — so it's all about us."

He continued: "Our manager put a quiet request in the business, like, 'Okay, APOCALYPTICA searching for a singer for the record. Do we have any suggestions or any people who are great singers who do not have the right band yet?' And we got about 20-25 suggestions. We went through them, and asked five of them to make a recording and from those we picked out three and asked them to sing a little piece of 'Hole In My Soul' from the new album, and Franky was the obvious choice. So he came through the record company search. Somebody said at the American label that he's the guy, 'I've used him many times on session [recordings]. He's great. And he didn't have anything active going except his solo record, but nothing band-wise."

Eicca added: "I love Franky's voice. He's not just a regular singer. He has a very soulful sound and he's able to sing different styles, which is perfect for APOCALYPTICA, because our songs are not only heavy metal, it's a variety of different colors and different dynamics, and the singer needs to match that, and I think Franky is a perfect match."

Asked if APOCALYPTICA would consider keeping Perez permanently as a bandmember, Eicca said: "It's too early to think about it, but nothing is decided. Now we got the record done, and then we will have touring more or less for two years, and at the end of that time, or sometime during those two years, we will know. But it wouldn't be an impossible option to have Franky in the band, but it's too early to think about it. We have been through several concepts, and we still want the option to change the concept to do something different."