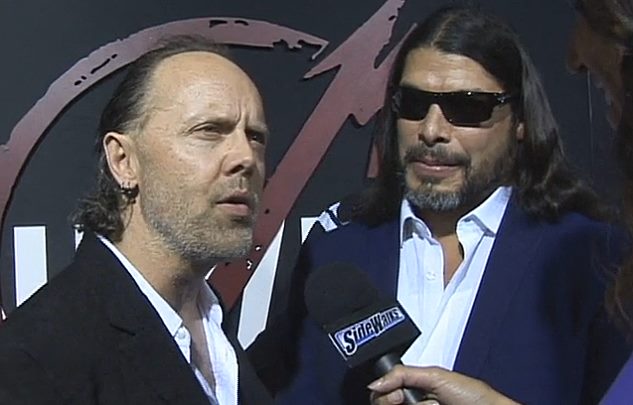 SidewalksTV.com spoke to the members of METALLICA prior to the September 16 screening of their movie "Metallica Through The Never" at the Metreon Theatre in San Francisco. You can watch the footage below.

"It's kind of bizarre actually, to be standing on a red carpet in a place where you usually buy your popcorn," METALLICA frontman James Hetfield told the San Francisco Chronicle. "It really brings it home, knowing that you're premiering your film in a place where you bring your kids to watch movies."

"We decided we needed to make this unique," METALLICA guitarist Kirk Hammett told QMI Agency about the "Through The Never" movie. "So we came up with the concept of having a running narrative in the movie that weaves in and out of the concert footage. We liked that idea enough to tell our managers, 'This is the type of movie we want to make.'"

"I think that METALLICA fans that are really into action films and movies with a lot of energy are going to be blown away," METALLICA drummer Lars Ulrich told Revolver magazine. "This is a very unique film. I don’t know what people are going to think of it. I like it. But obviously I’m biased."

METALLICA reportedly spent $20 million of its own money to make the film, which will open in limited release on IMAX screens around the country on September 27. The film will then expand to more theaters on October 4.

The soundtrack, which features a number of METALLICA classics performed live in the movie, was released on September 24. The two-disc CD came out on METALLICA's own label, Blackened Recordings, also in digital and vinyl formats.

The concert sequences for the movie were shot in August 2012 at two shows in Vancouver, Canada and feature a stage containing elements of many of METALLICA's previous live productions from the past 30 years.