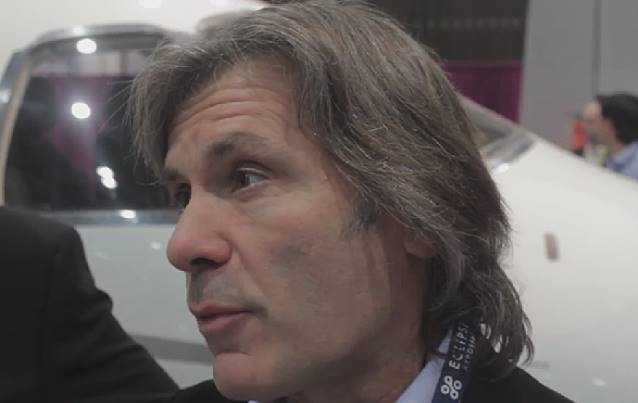 Corporate Jet Investor recently quizzed IRON MAIDEN singer Bruce Dickinson — who in October joined Aeris Aviation, the European distributor of Eclipse aircraft, as non-executive chairman — on how much he knew about the Eclipse 550 twin-engine business jet. You can find out how he did in the video below.

After testing Dickinson's mettle, Corporate Jet Investor turned the tables and asked European head of distribution, David Hayman of Aeris Aviation, based in the U.K., three questions on IRON MAIDEN before he had chance to run to the hills. Watch the video below to see how much he knew about the band.

In September, Dickinson, who is also an entrepreneur and commercial pilot, underwent his type rating training in an Eclipse by piloting himself to the IRON MAIDEN tour venues in the USA, clocking up over 50 hours. He met in St. Louis, Missouri with Eclipse CEO, Mason Holland, president global services, Ken Ross and David Hayman.

Dickinson was impressed by the world's most eco-friendly and economical twin engine business jet. He said, "Now that the jet is back in production, the market for it to reach its full potential is enormous.

"There are no other twin engine jets that can come close to the Eclipse in terms of cost and economy and, with a range in excess of 1000nm, it is ideal for Europe. It is great to fly and I am excited by the future for this remarkable aircraft."

Dickinson is the chairman of a large service and maintenance facility; Cardiff Aviation in St. Athan, Wales, United Kingdom. Cardiff Aviation and Eclipse have begun discussions on ways for both organizations to work closer in the future, bringing service, training and adding additional value to the Eclipse 550 in Europe and beyond.

Eclipse launched the new 550 at NBAA in Las Vegas on October 22. The 550 is the new production model jet featuring highly advanced features such as 3D synthetic and infra-red enhanced vision avionics, auto-throttles and anti-skid brakes; features rarely seen on jets under $10m. It is the least expensive twin engine business jet in the world and retails at USD $2.89 million.