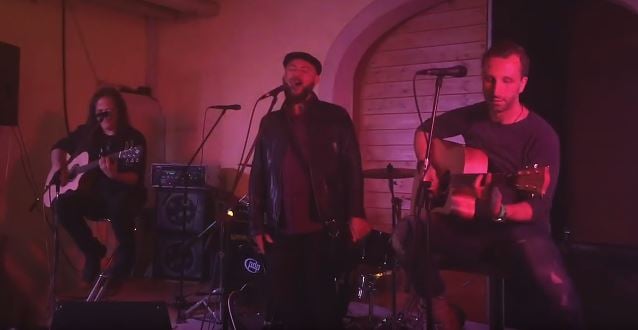 Former QUEENSRŸCHE singer Geoff Tate held a record-release party and open jam session for "Resurrection", the second album from his OPERATION: MINDCRIME project, on Saturday, September 24 at the Rinklin Winery in Eichstetten, Germany. Fans were invited to drink wine, eat food and listen to the new album. There was also a live acoustic set by Geoff and friends as well as an open jam session with musicians.

In an interview with Metal Magnitude, Tate stated about the event: "I do a lot of acoustic jamming. It's fun, and really kind of… it's tradition, it's music tradition. I've always had this kind of open-door policy when I'm playing shows that if a musician that I know is in town touring, I've always invited them to the show — you know, 'Hey, come on and sing a song with us,' or, 'Come up and play an instrument with us.' People ask me that all the time when I go to their shows too, I just performed a song with DISTURBED a couple [of months] ago and that was really fun when they came through town. I think it's just a fun thing for musicians to share music and if you admire that musician and you like what they've done, or you're moved by a particular song that they do, I think it's a wonderful thing to share that time, you know? It also kind of brings the song back to its origins, because almost every song is written on an acoustic guitar, or piano and voice, and it's nice to bring the song back to its original format."

Fan-filmed video footage of the Eichstetten record-release party can be seen below.

"Resurrection" was released on September 23 via Frontiers Music Srl. The album is the second part of Tate's musical trilogy. Tate explained: "It continues the story that began on the first album 'The Key' with the near-death experience of the lead character known as 'H' and his subsequent recovery of the missing encryption key. With the Key finally in his possession, 'H' has everything he needs to finally launch his long awaited project called 'The New Reality'. Or does he..."

The singer continued: "I'm excited for people to hear and experience 'Resurrection' because I think it answers some of the questions that were posed in the first album, 'The Key'. Musically, it offers some of the most diverse and challenging material that I've ever written."