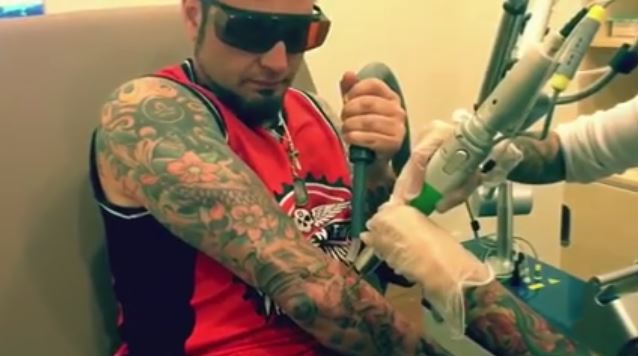 According to The Pulse Of Radio, Phaze Laser Tattoo Removal will officially open this Friday (April 3) at noon PT in Las Vegas, Nevada. Spencer will be on site most of the day as the company launches at 1131 East Tropicana in Sin City. Spencer said about the service: "People sometimes regret having a tattoo with a former lover's name, or one that was poorly executed. It's called tattoo regret."

Spencer got his first tattoo at age 16, realizing a decade later that he no longer wanted an image of the cartoon character Yosemite Sam adorning his skin. But then he experienced the tedious and extremely painful of tattoo removal via laser beam.

For his own store, Spencer has purchased the Astanza Duality laser, which combines short pulses and high energy for greater and more complete ink shattering.

Spencer said: "There are all types of lasers of varying degrees of quality. Poor-quality machines require many sessions and some even lead to damaged skin. I searched everywhere until I found the latest and best technology. Others may offer a cheaper fix, but you get what you pay for."

The store will be open seven days a week from noon to 8:00 p.m. The first 100 people who sign up for an appointment will receive a 50 percent discount on their first session.

FIVE FINGER DEATH PUNCH is currently in production on its sixth studio effort, scheduled for release this summer.

The band released its last effort, "The Wrong Side Of Heaven And The Righteous Side Of Hell", in two parts, with the first arriving in July 2013 and the second following in November 2013.