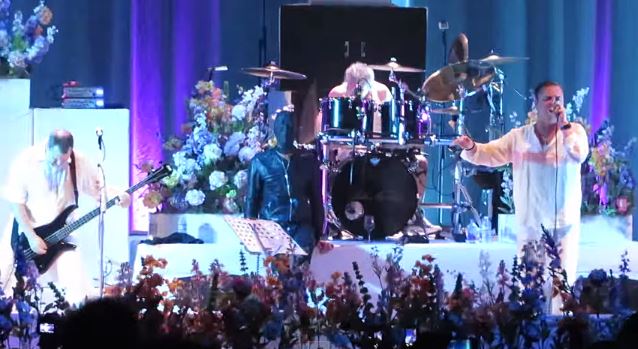 The FAITH NO MORE vocalist joked from the stage that McKagan was the Gimp on Thursday night, April 23 at at the Wiltern, and Duff tweeted a photo of himself dressed as the Gimp.

The Gimp character has been accompanying FAITH NO MORE at all of their live shows in 2015.

As previously reported, McKagan and Krist Novoselic (NIRVANA) will share the stage May 17 at The Neptune in Seattle, Washington, where the bassists from the biggest bands of the '80s and '90s will talk music, politics, life and celebrate the release of McKagan's new memoir, "How To Be A Man (And Other Illusions)", the follow-up to his New York Times best-seller, "It's So Easy (And Other Lies)".

Whereas "It's So Easy" told the story of McKagan's life, from his Seattle upbringing, the formation of GUNS N' ROSES and his brush with death, "How To Be A Man (And Other Illusions)" recounts some of the lessons he's learned along the way. McKagan shares the wisdom he gained on the path to superstardom — from his time with GUNS N' ROSES and VELVET REVOLVER to getting sober after a life of hard living to achieving his personal American Dream of marrying a supermodel, raising a family and experiencing what it's like to be winked at by Prince.

FAITH NO MORE's two best-selling albums, 1989's "The Real Thing" and 1992's "Angel Dust", are being reissued in new editions featuring plenty of bonus rarities. The reissues will be available as either double-CD or heavyweight double-vinyl sets with the CDs available on June 9, one month after the band releases its first set of new music in 18 years, "Sol Invictus", on May 19.

Neither disc will contain any previously unreleased tracks, but both will collect hard-to-find rarities in the form of live cuts, remixes and other B-sides and bonus tracks.