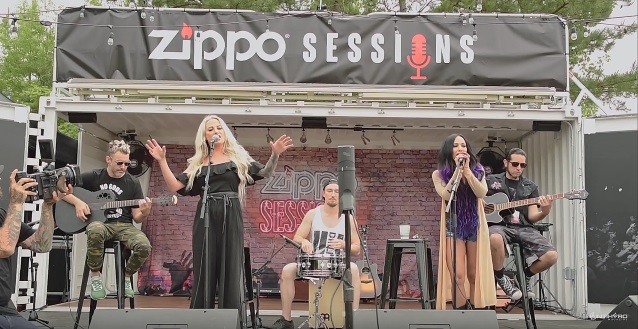 BUTCHER BABIES played a special acoustic set Saturday (May 5) as part of the the "Zippo Sessions" at this weekend's Carolina Rebellion festival at Rock City Campgrounds at Charlotte Motor Speedway in Concord, North Carolina. Video footage of the performance — courtesy of Antihero Magazine— can be seen below.

BUTCHER BABIES are continuing to tour in support of their third album, "Lilith", which was released last October via Century Media. The follow-up to 2015's "Take It Like A Man" was produced by Steve Evetts (THE DILLINGER ESCAPE PLAN, SEPULTURA, SUICIDE SILENCE) and marks the band's recording debut with new drummer, Chase Brickenden, who replaced Chris Warner in 2016.

BUTCHER BABIES co-vocalist Carla Harvey told Meltdown Of Detroit's WRIF radio station that the music on "Lilith" "runs the gamut" from "great thrash metal" to "a little bit of '90s influence." She said: "We're singing, we're screaming and it's just a great, great album. I couldn't be prouder of it. I think there's four songs where we do predominantly singing on it. And normally that would scare even me, 'cause I'm, like, 'I'm a metal girl! I don't wanna be singing.' But it's so beautiful — it really is. So it's kind of ballady, but not too ballady. It's very dark, sensual — the lyrics are very sensual on this album."