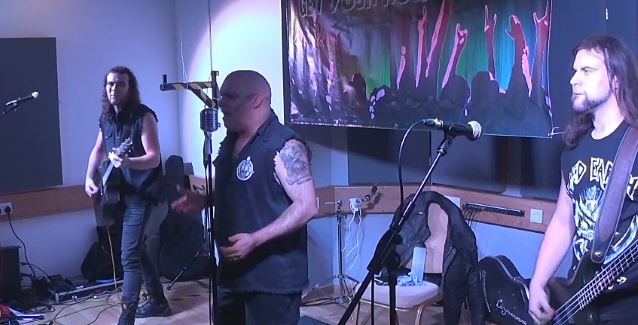 Blaze was joined on acoustic guitar by Chris Appleton (of British metal band ABSOLVA), who plays lead guitar in Blaze's full metal touring band for Europe, as well as Chris' brother Luke, who is bassist with American power metallers ICED EARTH and has also previously played in Blaze's band.

Video footage of Bayley, Chris Appleton and Luke Appleton performing the MAIDEN classic "Man On The Edge" at Castle Rock can be seen below.

As well his customary expansive tours of Europe and South America, on July 18, 2015, Blaze will play a special "Silicon Messiah" exclusive set at SOS Festival, Radcliffe, Manchester, England. That will be a full metal show with a backing band comprised of ABSOLVA bandmembers Chris Appleton (lead guitar), Martin McNee (drums) and Karl Schramm (bass). They will play the entire "Silicon Messiah" album, plus other tracks.