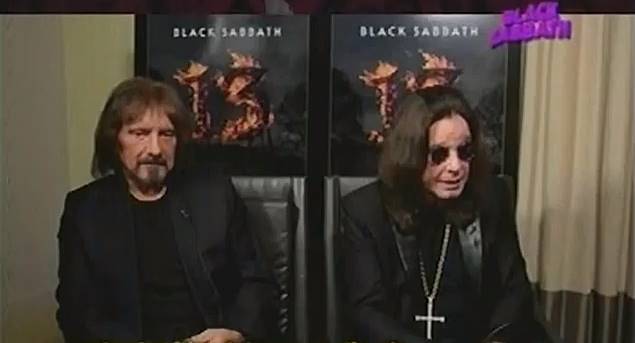 This past summer, Claudio Rodríguez of the Mexican cable/satellite television network Telehit conducted an interview with Ozzy Osbourne (vocals) and Geezer Butler (bass) of the legendary heavy metal band BLACK SABBATH. The chat, which originally aired in July, can now be seen below.

BLACK SABBATH will release a concert Blu-ray/DVD, titled "Live… Gathered In Their Masses" on November 26. The disc was filmed on April 29 and May 1 in Melbourne, Australia, where the band kicked off its 2013 world tour. It features the first live recordings of songs from the new studio album "13", which came out in June and was the first SABBATH effort in 35 years to feature original members Ozzy Osbourne, guitarist Tony Iommi and Geezer Butler.

The set will come in several formats, including a standalone DVD, a standalone Blu-ray, a combo pack containing a CD with audio from the shows, and a deluxe box with exclusive bonus video content, a poster, a signed set list, a photo booklet, guitar picks and official show ticket.

"13" entered the album charts in 13 countries at No. 1, including its first-ever chart-topper in the U.S.

SABBATH just completed a tour of South America and Mexico and will head to Europe in November and December.