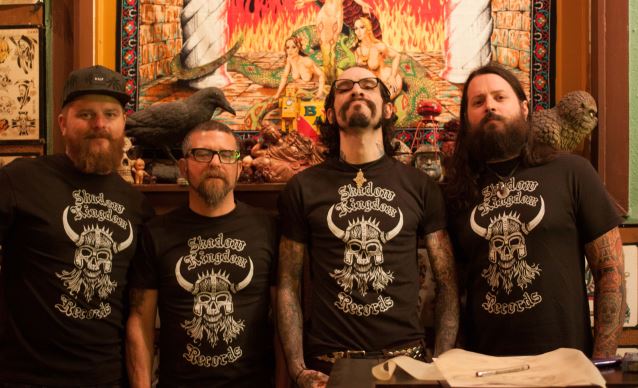 Shadow Kingdom Records has announced the signing of Houston, Texas' "dark heavy metal" band VENOMOUS MAXIMUS. The group is putting the finishing touches on its new album, "Firewalker", for a 2015 release.

Reads a Shadow Kingdom press release: "The name of the band reminds us of the classic 'Gladiator' film where Russell Crowe (aka 'Maximus') was nothing short of a complete madman who would die for his family and country without fear or worry of what might happen to him in the process. VENOMOUS MAXIMUS is very much like that in their attitude and approach to playing music with conviction and without any genre barriers. In VENOMOUS MAXIMUS, we have a band that is interested in writing great, memorable songs that vary in length, tempo, and emotion.

"Those who are familiar with VENOMOUS MAXIMUS' 2012 Napalm Records release, 'Beg Upon The Light', know what kind of a treat you're in for. The band's upcoming new album 'Firewalker' is a great continuation of their talents. It's really rare to find bands that have no barriers and just focus on quality songs. This really takes us back to the beginning of Heavy Metal when BLACK SABBATH would put out records. Some of the jams would be fast and heavy, while others would be slow and powerful. BLACK SABBATH could play any genre because they invented all of the heavy metal genres you hear today and when you hear VENOMOUS MAXIMUS' music, it reminds us of those same ideals. It's just GREAT music and you love hearing it."

VENOMOUS' most recent album, "Beg Upon The Light", hit with adamantine force, and has met to widespread celebration, being called "Lovecraftian" and a "masterpiece" by Metal Injection, "mayhem without mercy" by Decibel and "super-thick occult doom" by Rhapsody. Not only did "Beg Upon The Light" put the quartet on the map, it proved once and for all that VENOMOUS MAXIMUS' sound and vision defied categorization.

A live powerhouse, VENOMOUS MAXIMUS has toured the U.S. as hand-picked guests of metal legends DOWN, HIGH ON FIRE and PENTAGRAM and has created a huge buzz as part of both Austin's SXSW and Fun Fun Fun festivals.