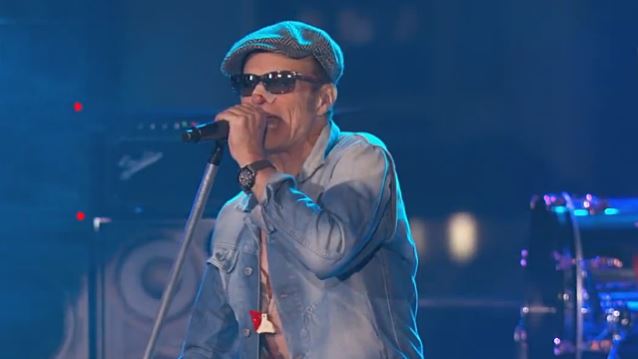 VAN HALEN frontman David Lee Roth bashed himself in the nose with a microphone stand just moments into "Panama", the opening song of the band's Monday night (March 30) performance on "Jimmy Kimmel Live!" According to The Pulse Of Radio, Roth told the audience, "Ladies and gentlemen, I cut my nose on the microphone. I apologize," before he left the stage for nearly two and a half minutes to seek treatment for the injury.

The rest of the band jammed until Roth returned and they restarted their eight-song performance for a crowd of thousands on a closed-off Hollywood Boulevard. Two of the songs — "Panama" and "Runnin' With the Devil" — aired Monday night, while three more — "Eruption", "You Really Got Me" and "Hot For Teacher" — were broadcast on Tuesday's (March 31) show. The set also included "Dance The Night Away", "Unchained" and "Ain't Talkin' 'Bout Love".

During last night's "Jimmy Kimmel Live!", the show's host used slow-motion video to explain how Roth cut his nose open. Check out the clip below.

The performance was VAN HALEN's first on national television since Roth rejoined the band in 2007.

The band performed on the show to promote the release of its first-ever live album with Roth, titled "Tokyo Dome: Live In Concert", which came out on Tuesday.

VAN HALEN is next scheduled to appear on the Thursday (April 2) edition of "The Ellen DeGeneres Show".

The quartet will kick off a summer/fall North American tour on July 5 in Seattle, winding down on October 2 in Los Angeles. Tickets for the trek go on sale this Saturday (April 4) at Ticketmaster.com and LiveNation.com.