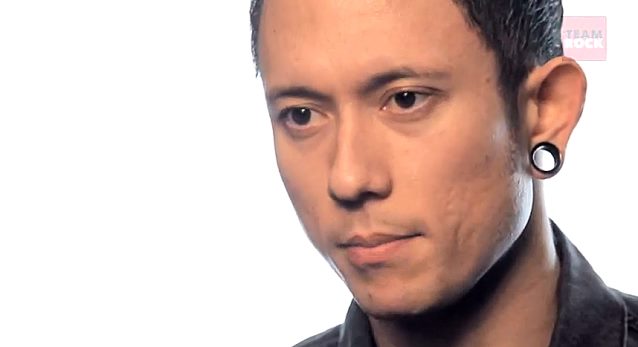 U.K.'s Metal Hammer magazine recently asked guitarist/vocalist Matt Heafy of Florida metallers TRIVIUM to give us his thoughts on the state of metal in 2013. As ever, his answer was an interesting one. Check out the clip below.

"The state of metal in 2013… It's in a great place and it's also in a bad place," Heafy began. "I think the fact that there is so much… I guess to each his own, and I always talk about being acceptant of all styles of life and all genres of music — I mean, you can learn something from everything — there is a lot of manufactured nonsense out there.

"I know I've been looking for that young, new metal band.

"Where are the kids that are picking up a guitar, saying, 'Hey, I wanna be like IRON MAIDEN,' 'Hey, I wanna be like METALLICA'? Instead it's bands that are putting weird dance music in with heavy music. Which is fine — I guess they're doing something that kids love — but for me, as a metal fan, I'm missing out on where are the young kids picking up a guitar and starting metal bands. I guess there are a few last hopes out there — there are some really incredible bands that are doing some really incredible things. The fact that METALLICA and IRON MAIDEN are bigger than ever is a really, really great thing.

"We, as fans of metal, need to not just look at it as a thing to get turned on to casually — it's a lifestyle; it's far beyond just something that we casually listen to.

TRIVIUM's new album, "Vengeance Falls", will be released on October 15 via Roadrunner Records. Produced by David Draiman (DISTURBED, DEVICE), the follow-up to 2011's "In Waves" is available for pre-order at Trivium.org. The first single, "Strife", is available as an instant download with all pre-orders.

TRIVIUM's "Strife" video can be seen below. The clip was filmed in July at Studio One in Orlando and was directed by Ramon Boutviseth, who has previously worked with NONPOINT, DARKEST HOUR, INCUBUS and ALL THAT REMAINS, among others. Check out photos from the video shoot at this location.