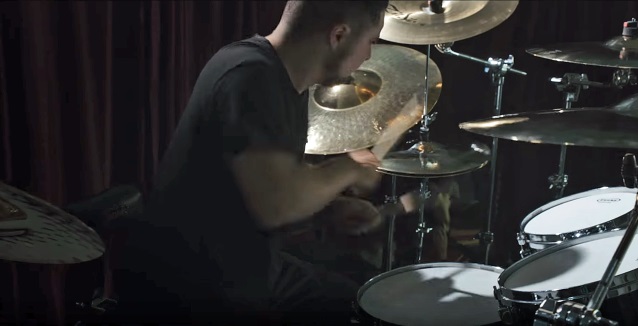 Drum-cam footage of TRIVIUM's Alex Bent performing the song "Kirisute Gomen" with his bandmates on November 17, 2017 at the Summit Music Hall in Denver, Colorado can be seen below (courtest of Sick Drummer Magazine).

TRIVIUM bassist Paolo Gregoletto told Midwest Beatdown in an interview that Bent "is a monster" musician. "If you've seen us live, you know what I'm talking about, but if you haven't yet, you're gonna be in for a surprise," he said. "Not only just playing stuff, but just so in control of it. There's that X factor of just being able to be completely playing the wildest stuff, but then looking back, he's not breaking a sweat and it's just looking so effortless. It's a sight to behold. It's fun for us, 'cause I turn around and [go], 'Woah! The dude's really good.'"

According to Gregoletto, Bent's addition to TRIVIUM has served as a boost for the band's live performances. "I think our energy on this tour has been unlike anything probably since the beginning," he said. "'Cause when you first start out, you're just kind of going out and just giving it your all, and it's back before you have really good monitors and stuff, so maybe things don't even sound that good but you're just going for it. And now we have the best of both worlds — having the energy of feeling like we're a new band but [with] great sound and can actually play the instruments proficiently. And having a guy like that that's so solid, for us, it's just about, 'Okay, we can perform. We don't have to worry about him back there. We can do our thing.' And it's been great."

TRIVIUM's eighth album, "The Sin And The Sentence" — the band's first featuring Bent — was released in October via Roadrunner. The disc was recorded with producer Josh Wilbur (LAMB OF GOD, GOJIRA) at Santa Ana, California's Hybrid Studios.