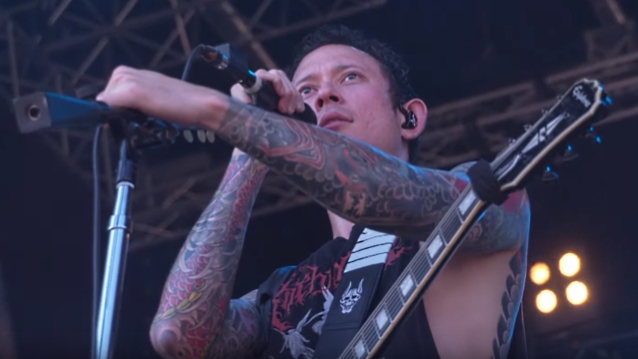 Professionally filmed video footage of TRIVIUM's entire June 29 performance at Vainstream Rockfest in Münster, Germany can be seen below.

TRIVIUM is continuing to tour in support of its latest album, "The Sin And The Sentence", which was released in October 2017 via Roadrunner. Recorded with producer Josh Wilbur (LAMB OF GOD, GOJIRA) at Santa Ana, California's Hybrid Studios, the LP features the band's first recordings with drummer Alex Bent, who joined TRIVIUM in 2016.

In an interview with That's Not Metal Podcast, TRIVIUM frontman Matt Heafy spoke the choices he and his bandmates have made in their varied back catalog that has led to "The Sin And The Sentence".

"We've always liked to test the boundaries of what we can do as a band and as TRIVIUM," Heafy said. "[While making 'The Sin And The Sentence'], we said to ourselves, 'This has to be the greatest record we've ever made or there's no point in carrying on.' That's one of the things we said; it's very intense. Another thing we said is, 'This album has to make everything make sense.' Another thing we said was, 'Let's just make the kind of music that we wanna hear as fans of metal.' If we were guys not in TRIVIUM, what's the record we would wanna hear? Let's make stuff that, we don't care if people are gonna love it or hate it; let's just make this thing."

Matt also addressed the fact that it has been difficult for TRIVIUM's core trio — Heafy, guitarist Corey Beaulieu and bassist Paolo Gregoletto — to keep a drummer in the last few years, prior to the addition of Bent less than three years ago.

"The drumming is what the band is built upon, it's the foundation for which all the music is built upon, and if you don't have a strong foundation for a house or a building, it eventually collapses," Matt explained. "And I'm so thankful that the stars finally aligned, after eight records, to find the guy that we needed to find. And I think that when people hear Alex, it's not a question of 'Why?' It's more like an observation, like, 'Oh, I see you did it again, but I know why.' Because he's that freakin' good."