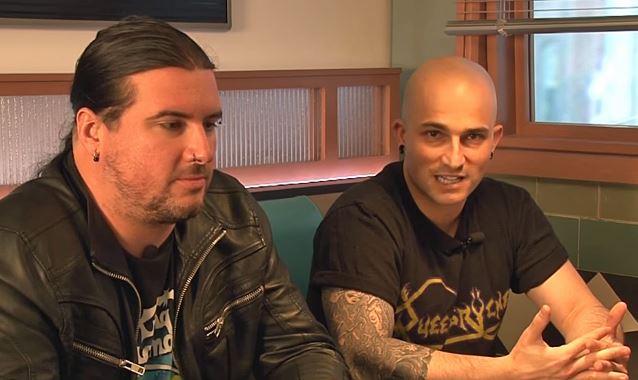 TRIVIUM bassist Paolo Gregoletto had admitted that he was "worried" about the band's future after frontman Matt Heafy was forced to change his vocal style following a health scare.

TRIVIUM canceled a number of shows in May 2014 after Heafy overworked his vocal cords during a gig in Columbus, Ohio, and his doctor told him to rest. Since then, the group has returned with a new studio album, "Silence In The Snow", which is notable for its complete lack of "screaming" vocals — a significant departure from the approach that characterized TRIVIUM's classic 2005 record "Ascendancy".

In a brand new interview with Artisan News, Gregoletto talked openly about Heafy's vocal issues and the difficult choices TRIVUM was faced with in an effort to move forward as a band.

"Matt had a big scare a couple of years ago when we had to cancel a few shows," he said (see video below). "We thought maybe he hurt his voice. Thankfully, it was kind of just overuse. We played a show at, like, ten o'clock the night before and then we were playing at twelve o'clock in the afternoon the next day. And Matt's voice was toast, and we had to cancel. And he had to re-learn a lot of techniques."

He continued: "Honestly, the one big thing with ['Silence In The Snow'] is we didn't have the screaming. But that was always a question: Is Matt's screaming gonna come back? And if we don't get Matt screaming again on the old stuff, do we wanna make a record that features it so prominently that we're gonna have problems pulling this off live? So that was kind of a question in the back of our minds. It wasn't the only thing that made us have this record have just the heavy singing, but that was definitely… I mean, at least in my mind, I'm, like, 'This could change our band forever, if he can't do that stuff.' Because then Corey [Beaulieu, guitar] is gonna have to really… He's already picking up so much of the slack with Matt not being able to scream. And there was a technique [Matt] learned, but it was gonna take time, and there was no guarantee that he was gonna get it. And now, within the last three [or] four months, it finally clicked, and Matt is able to do pretty much 99 percent of the stuff he was doing before. And now that kind of presents us with the opportunity of going forward with the record. Now we don't have to worry as much about it. If we wanna put screams in songs, it's not, like, 'Well, Matt's not gonna be able to do it.' It would suck to have it and then can't do it live. Now we can do it again. But at the time, it was definitely a question."

According to Paolo, exacerbating the problem was the fact that many TRIVIUM fans wanted to hear songs from the band's early catalog performed live, a prospect that was made increasingly difficult by Heafy's inability to sing the tracks as they were originally recorded.

Gregoletto said: "A lot of the old stuff with the screaming, you need two people to really pull off a lot of the call-and-response. And there was a point where Corey was doing like the majority… It sucked for the setlist, because we couldn't… If we put too much stuff in there, it was just like… Matt's not the lead singer at that point; then it's mainly Corey doing a lot of screams and Matt jumping in here and there for some singing."

He continued: "I was definitely a little worried at the time. You have all these songs that people wanna see, and it's frustrating not to be able to do it, and it's not Matt's fault, because he had to just learn this new technique, 'cause the doctors were, like, 'If you keep doing this, you're gonna have a problem. It's not repairable, and then you're done.' And then you can't hold that against Matt for being in that position. We were doing what we were doing, and you have to make that change. And to do it with a new record coming up, it was definitely a little bit stressful."

After the recording of "Silence In The Snow", drummer Mat Madiro was dismissed from the band and was replaced by Paul Wandtke, who made his live debut with the band on December 5, 2015 at Knotfest in Mexico.

"There was a lot going on all at once," Paolo said. "And to be able to balance it all and pull off a record, and pull off a record that we felt really confident with in the end and had a real great, solid vision. When we got to the end of it, I was definitely pretty spent. I was just, like, 'Man, I'm tired. I can't believe we've gotta go tour in a few months.' But now since we've been out, since we've had Paul, I feel like recharged again. Yeah, this feels fun. This feels like not as much stress."

"Silence In The Snow" was released on October 2, 2015 via Roadrunner. The follow-up to 2013's "Vengeance Falls" was produced by Michael "Elvis" Baskette (SLASH, ALTER BRIDGE, THE AMITY AFFLICTION) and was mixed by Josh Wilbur (GOJIRA, LAMB OF GOD).

Wandtke previously drummed for the hit musical "Rock Of Ages" and sat behind the kit for KILL HANNAH during the band's main-support run with the SMASHING PUMPKINS.