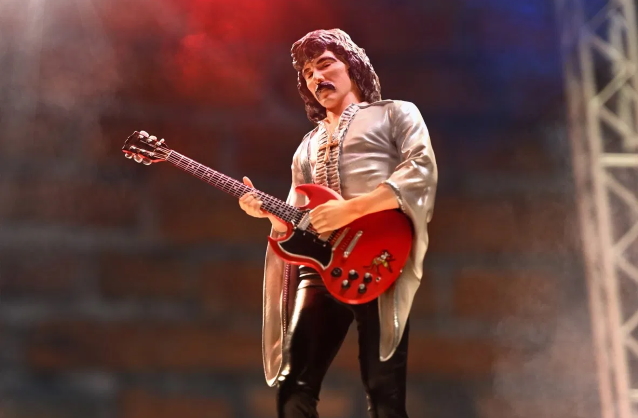 KnuckleBonz, creator of the Rock Iconz music collectible series, has announced the arrival of the initial production units for Tony Iommi's Rock Iconz statue to its USA warehouse. Pre-orders are always first to ship and go out in the order they were received. The remaining inventory is super limited, so if you are a BLACK SABBATH fan, don't miss out.

The Tony Iommi statue sells for $149 and ships worldwide.

KnuckleBonz has been creating high-end statues since 2003 and continues to be dedicated to honoring music's greatest performers through master artistry in the limited-edition statue series called Rock Iconz. The company's goal is to capture a "live performance" moment in each limited edition.

In February 2017, SABBATH finished its farewell tour, "The End", in Birmingham, closing out the quartet's groundbreaking 49-year career.

"The End" was SABBATH's last tour because Iommi, who was diagnosed with cancer in 2012 and is currently in remission, can no longer travel for extended amounts of time.

SABBATH wrote and recorded its 2013 reunion album, "13", and toured it all over the world while Iommi was going through treatment for his illness, with the guitarist having to fly back to England every six weeks.

The original lineup of SABBATH came together in 1969 with Iommi, singer Ozzy Osbourne, bassist Geezer Butler and drummer Bill Ward. That lineup recorded and toured through 1978, and periodically reformed through the '90s and 2000s for live work.

They regrouped again in late 2011 for a new album and tour, although Ward dropped out after a few months over financial issues. SABBATH used Ozzy's regular touring drummer Tommy Clufetos after that for live work. RAGE AGAINST THE MACHINE's Brad Wilk laid down the drum tracks on "13", which came out in June 2013.

Iommi said in 2016 interview that "the lowest moment" for him was being diagnosed. He explained: "You automatically wind yourself up saying, 'That's it then,' but that is not always the case. When they tell you, you think, 'Oh God.' That was a low time. I have had a few low times in my life like everybody has, but that was one that stuck in the head."

The BLACK SABBATH guitarist successfully underwent an operation in January 2017 to remove a noncancerous lump from his throat.